Back by the Fire


Firelight returned to The Boatyard Cafe in Gweek earlier this month, and boy, was it worth the wait.

Blagging to board a ship, for the chance to sail the high seas. Singing the stories of forgotten souls. Going deep on the qualities of seaweed. The different stories told round the fire at this month’s Firelight had one thing in common: the power of totally immersing yourself in one idea, one objective.

In an age where attention is vied for as a commodity, where half of Brits are reported to be running a side hustle, we heard from three inspiring individuals who are eschewing such trends,  turning their passion projects into a business, their fascinations into practice and little-known stories into songs; all acts creating change.

It felt like Firelight was advocating the personal and societal value of allowing yourself to get lost in research, in little considered subjects, in detail, to then find a new path out.

Here’s some highlights: grab a marshmallow and a toasting fork, and settle in. 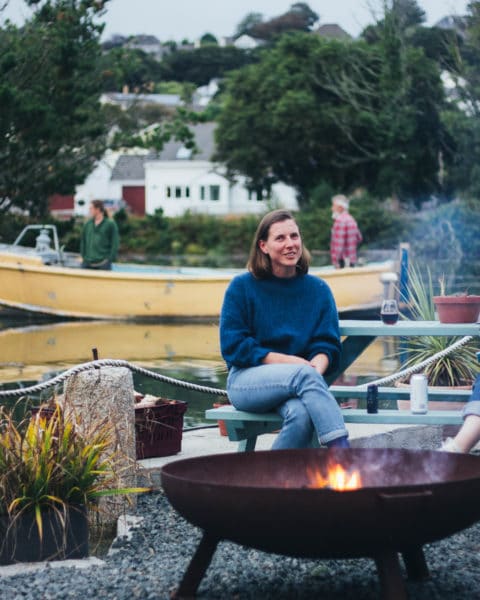 “My dream was always to be able to work from a ship.”

Alex Geldenhuys is on a mission. Not content with successfully creating a sustainable system of importing produce through her business New Dawn Traders – working with sailing cargo vessel The Gallant to import produce pollution-free – she’s embarking on plans for a New Dawn Traders ship, and sharing everything she has learnt to grow the global fleet of wind-powered freight.

Crucially for her, this should be accessible to all. “We need future captains, we need future sailors. We want systems which make people who are passionate about it [sailing] able to access it, rather than people who can afford it.”

This is no mean feat. At the heart of the business model of New Dawn Traders is a monumental challenge. As Geldenhuys said, “The entire global economy is built on shipping”. Creating a new model that goes against the basic features of that global economic system – high emissions, three shipwrecks a day from travelling in any conditions to meet international delivery deadlines – is, well, monumental.

But Alex isn’t one to shy away from a challenge, and New Dawn Traders is building new models for supply chains that put the planet and people first:  “To sail from Porto to Penzance could take seven days, but we allow 25. We try to work with the seasons – rather than against.”

“I wanted to do something a bit different with the seaweeds, to paint them in the way that I thought was beautiful.”

Sarah Jane Humphrey has a passion for plants and a talent for capturing the magic that happens when science and art meet. The illustrator, workshop facilitator and owner of the Botanical Atelier store in Falmouth, is a keen sea swimmer, and one day discovered an underwater forest “illuminated” by rays of sunlight.

Since then Humphrey hasn’t looked back, with her journey taking her in an unexpected direction: channeling her passion onto the page and changing her practice in a quest to preserve the “life” that shone through that day in the water.  As she describes it; “working from photographs gives me the chance to capture them in the way they were when they were really super fresh.”

In the process of documenting the seaweeds that she forages on the beach every day, she has learned more about their many and varied benefits and is now determined to extol those virtues to Cornwall and beyond through her painting.

“The incredible thing about seaweed is it’s actually an algae, so this is the one plant that’s barely evolved in all of that time…seaweeds are the most fertile plants on planet earth.” 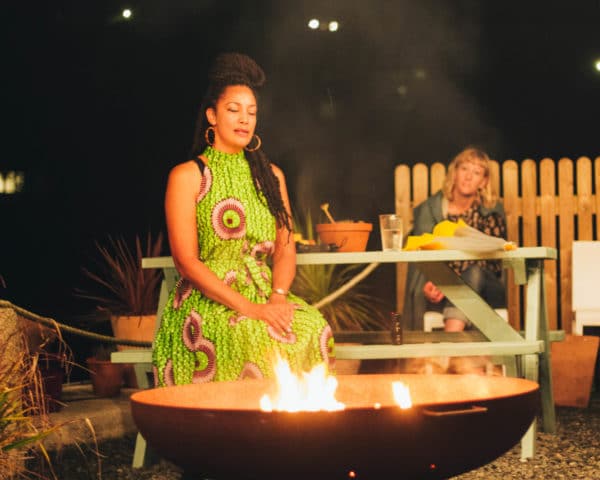 “We have no body of folk song that relates to black experience on these islands. So that’s what I’m trying to do.”

The title of folk singer Angeline Morrison’s new album project – The Sorrow Songs – is taken from the title of Chapter 14 in W.E.B. Du Bois’ era-defining text The Souls of Black Folk. “They that walked in darkness sang songs in the olden days – Sorrow Songs – for they were weary at heart,” writes Du Bois. Angeline describes the songs that originated from the southern US states as expressing “the deep grieving and sorrow of the everyday experience of enslaved people”.

From researching ‘slave graves’, in libraries and online resources, Angeline is discovering untold and forgotten stories of the black people who lived and died in Britain throughout British history, and through The Sorrow Songs is bringing their stories to life. We were lucky enough to hear three of these heartbreaking, haunting, folk songs at Firelight.

Introducing one of the songs, ‘Unknown African Boy’, Angeline told the rapt audience of a ship in 1830 passing the Isles of Scilly “carrying a great deal of ‘cargo’, including African humans” that ran into difficult waters and “was destroyed”. Reports of the ship’s cargo listed the contents as “seven hundred elephant tusks, palm oil, three boxes of gold dust, one box of silver dollars [and] unknown African boy, estimated age 8.”

“I wrote the song from the perspective of his mother.”