With the boom in bitters still going strong and a constant cocktail thirst to sate, Clare Howdle experiments with making her own bitters. Starting with sampling the bitterest of roots – gentian. Not to be advised.

Standing proud under the clear spring sky, a bright yellow gentiana lutea flower blooms on the alpine slopes of the Pyrenees. Harvested for thousands of years, these statuesque plants have roots that are valued as a restorative cure, digestive and flavouring. From the armies of Illyria in 180 BC to 18th century dinner parties, to the US military hospital in Angostura (now Bolivar), Venezuela, where the eponymously named ‘stomachic’ was first invented by Johann Gottlieb Benjamin Siegert, gentian root has been put to use around the world in all sorts of ways.

Faintly sweet and profoundly bitter, today gentian root is most commonly used as the heart of cocktail ‘bitters’, the key ingredient in any mixed drink where an acerbic depth is called for.

Whether it’s Stanley Tucci’s negroni masterclass (his viral cocktail-making videos have been cited as contributing to Campari’s sales jump of 46% in 2020 ), or an increased interest in traditional cocktails like Manhattans or Old Fashioneds but a lack of access to them, the home mixology mentality brought on by the pandemic has given bitters a boost. The most famous bitters manufacturer, Angostura, reported a significant shift from trade to home sales as a result of Covid-19, contributing to a positive first quarter in 2020, while inventive new cocktail bitters brands have been springing up like, well, gentiana plants, with flavours ranging from the classic to the bizarre (popping candy, smoke, or black truffle bitters anyone?). “We’re seeing an increase in different types of bitters, from cocktail bitters to Amaros and new iterations of the aperitivo,” The Whisky Exchange’s head of buying Dawn Davies told the Telegraph in a recent article on drinks predictions for 2022. “This trend is coming off the back of the negroni-making phase of lockdown and people wanting to pep up gin and tonics without needing tonnes of garnishes.”

But it’s not just getting DIY with signature bitter cocktails that’s on the up. People are making their own bitters too. Hailing from the same school of thought as homebrewing (which also saw a surge in the pandemic), making bitters takes time, patience and diligence, seeking out the right ingredients and following the rather onerous process to be sure of success.

All traits I am not known for possessing. But regardless, as 2021 heaved into view and the prospect of another lockdown (and more homeschooling) hit hard, I decided to give it a whirl.

First things first, I had to get hold of some gentian root. With a trip to the Pyrenees to harvest my own firmly off the cards, I did some online digging and ordered a packet. A few days later an envelope filled with tiny pieces of wood chipping arrived. Surely this wasn’t the sought-after ingredient? It looked more like a scoopful of the organic cushioning used in playgrounds to prevent broken bones. And it didn’t smell of much either. Dubious about wasting my time and energy on these little sticks, I could see only one logical thing to do.

How did it taste? You guessed it. Bitter. And woody. Not something I’ll be doing again in a hurry. But at least I knew what I was dealing with now. My first attempt was an abject failure. Jellification took out my grapefruit bitters (I later learnt that if you don’t remove all the pith – like the instructions tell you to – your mixture can turn to mush thanks to fruit’s pesky pectins), while my orange bitters succumbed to death by oven, as I attempted to speed up the process of air-drying orange peel with disastrous results (patience, as mentioned, not a virtue of mine).

But I wasn’t going to give in. I needed to crack this. My drinks cabinet was counting on me. So I tried again. Another batch of orange bitters loomed. And this time, I decided to document the process in the hope it would make me a more meticulous student. Did it work?

You can be the judge of that. The plus side of DIY bitters is that, if you do it right and none of your batch spoils, you get copious amounts of bitters to play with.

Enough to keep you in cocktails for a year.

Or to quench the thirst of say, an entire audience attending an evening of roots-inspired talks and inspiration. More on that soon… 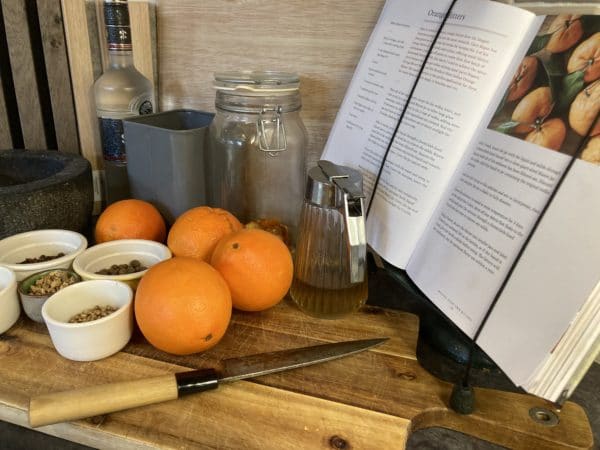 1. So it begins. Following the instructions for making Orange Bitters as laid out in Brad Thomas Parson’s Bitters: A Spirited History (Ten Speed Press, 2011).

2. Putting it all in… gentian root, coriander seeds, so much orange peel, oh and who knew allspice berries were so big? Cover in alcohol and store in a dark place to steep for two weeks. 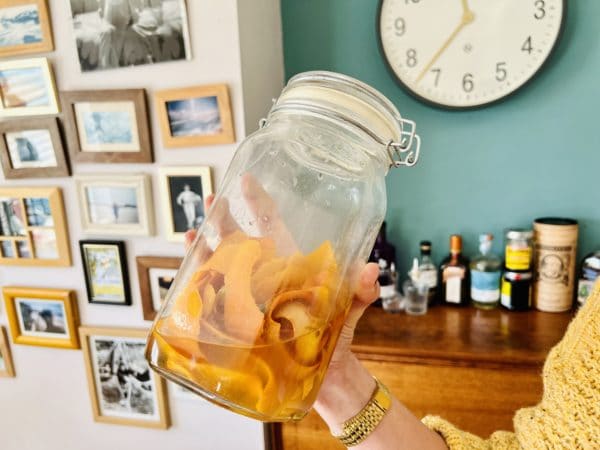 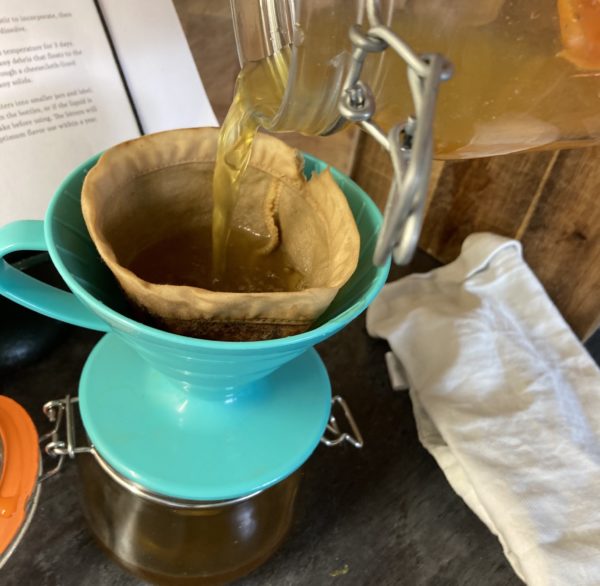 4. Straining time. The book recommends muslin. I used a V60 dripper and a fabric coffee filter. Work with what you have, I say. Seemed to do the trick. 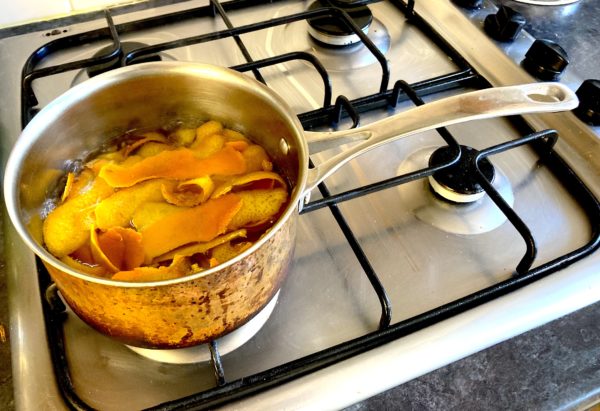 5. Separating out the solids, then boiling them up in a pan of water and leaving that to steep for a week. A lot of steeping, a lot of weeks. 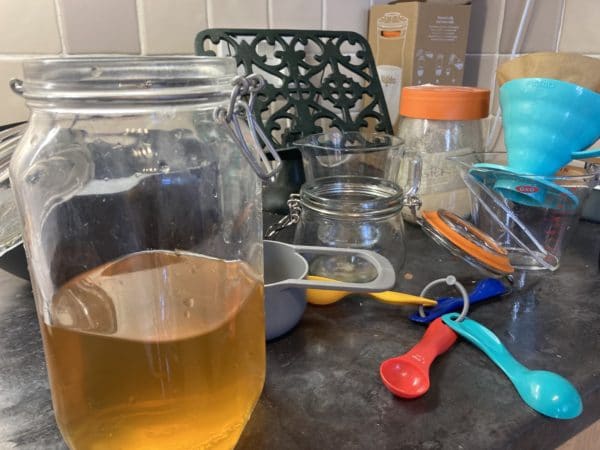 6. Combining all the liquids, adding sugar syrup (another component to make)… 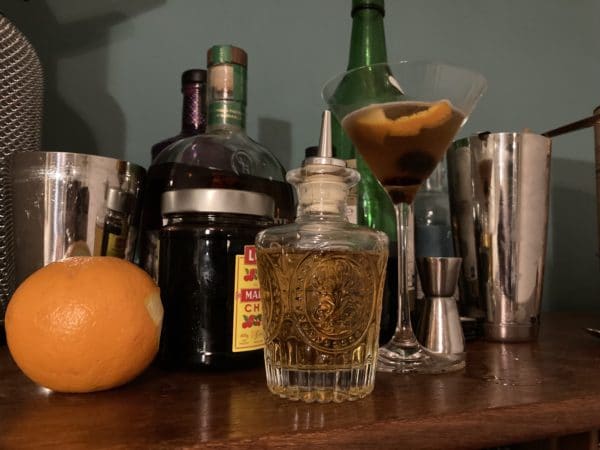 7. …and finally decanting. Then sampling!

Deeply entwined with empire, a diaspora of exotic species populates our horticulture. From the Victorian plant hunters who brought botanical incomers to Britain to the #decolonisethegarden movement, we unearth ancestral roots and explore how a more inclusive approach to gardening is flourishing, thanks to people like grower and author Claire Ratinon…
Read More

The tiny feelings that stay with us. The ripples from a pebble dropped in an ocean. Papercuts in our lives. For author Huma Qureshi, the everyday holds wonder and endless inspiration. She talks to Lucy Beckley about the roots of her inspiration, what drives her to write and how pigeonholing will never serve the story.
Read More

Wasted: the pioneers of sustainable sipping

How I See It | Rosanna Morris

Rosanna Morris’s linocut and woodcut illustrations are traditional yet contemporary, delicately floral and yet full of the power and strength of revolution. Her creative process is rooted in community, and she aims to bring people together through her work. We spoke to the Bristol-based printmaker, illustrator, allotment grower and mother about sowing the seeds of change through her art.
Read More

Rethinking the Hero’s Journey: The Right to Roam

Lucy Jane and Joya Berrow make up The Right to Roam, a film duo committed to telling stories from the source, and in the process, shaking up the foundations of the industry as we know it. Fascinated by their projects and approach to making film production sustainable, Ellie Russell caught up with them to find out more…
Read More

Entrenched gender inequality in farming is slowly changing, but it is underrepresented and little researched change. Photographer Amy Bullock has embarked on a thought-provoking portrait series to find England’s female farmers…
Read More

The Modern Classic by Rachel Carson was pivotal in changing society’s approach to nature management. Paul Dicken wonders how much it informed his earliest ideas about farming, unknown to him…
Read More

All Work and No Playlist? | Ammar Haj Ahmad

What helps you create? Whether it’s writing, drawing, shooting or even whittling, for so many of us, music makes the world go round. In fact, we couldn’t imagine working without it. Fascinated by how other creative souls get stuff done, we decided to unpick this causal connection by speaking to different creators about their practice, process and how music fuels their fire. This issue, it's Syrian-born storyteller, writer, dramaturg, performer and director, Ammar Haj Ahmad...
Read More