From floorboards to gin glasses, solid wool resin to soap stamps, hip flasks to leather patches for jeans – and much more besides – Jenny Shipley sure knows how to cut it. With a laser. Her eye-catching creations are lighting up different ways of doing business everywhere, from wooden bar tokens for Do Lectures to sustainability awards. 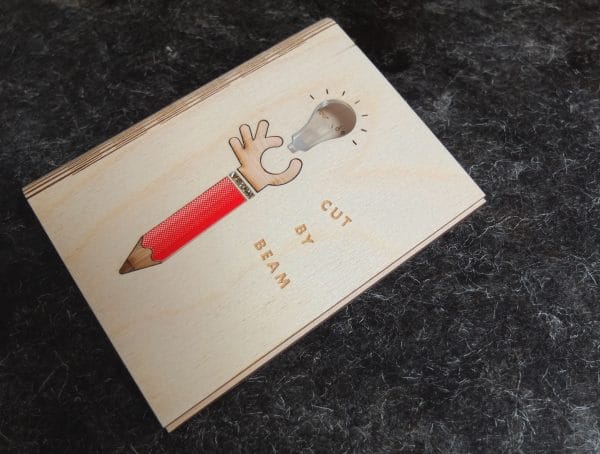 Wandering around the house as a kid, wearing the paper flip-flops that she’d made, Shipley “always loved making stuff”. Playing with lasers at university and summer holidays spent working in her auntie’s shop fuelled the fire, sparking ideas for things she might be able to sell. She’s not scared of taking a risk or two, either. Her first ever sailing trip was from the Outer Hebrides to the Faroe Islands – so why would she be fazed by watching a £9,000 laser cutting machine she’d ordered from China being unloaded by a tractor at the farm in Mylor, Cornwall, where her business Cut By Beam started out, before she had any real idea how she was going to make a business out of it?

But this blend of guts and creativity certainly seems to have paid off. Six years later, she’s so busy she now has three machines and a lovely new workshop at Argal Home Farm in the countryside just outside Falmouth. Look at Cut By Beam’s Instagram feed and it feels a bit like the poster child of the contemporary craft movement – lots of cool start-ups and challenger brands, full of beautiful typography and illustrations etched onto natural products. It’s an aesthetic that’s everywhere now – propelled in no small part by the surge of anti-plastic sensibilities. But, starting in 2013, Shipley has played more of a role in defining and elevating this aesthetic than jumping on any bandwagon. 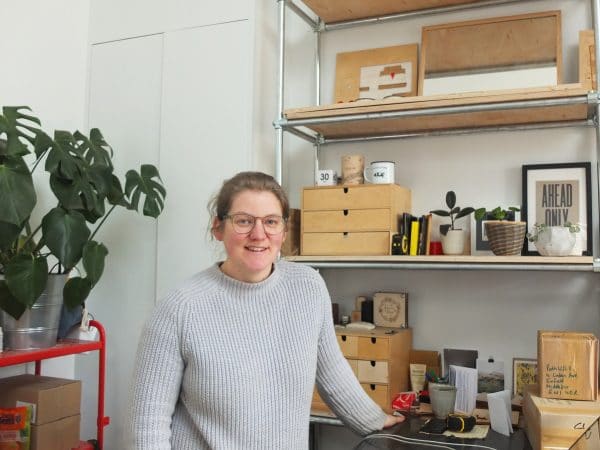 “I did 3D design at university and was really interested in craft and the rise of it,” she says. “One of the things I like most about laser-cutting is that it’s computer controlled technology, with elements of engineering in the mix, that you can make to look very handmade.” But it doesn’t feel like cheating. The artwork that Cut By Beam’s customers supply – including Hiut Denim, Surfrider Foundation, Finisterre, Surfers Against Sewage, Seasalt, Yallah Coffee and Tinkture Gin – often starts life on pencil/ pen and paper, conjured by a host of talented illustrators like Joby Barnard, Josh Vyvyan and Nathan Fletcher, before being ‘beamed’ onto whatever material is best for bringing it to life. 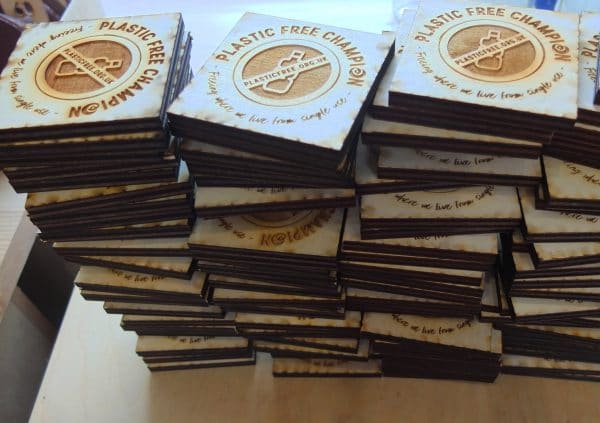 “One of the challenges when we started out was how to take this really technical and quite industrial process and make it more available to the craft and start-up market – changing the sort of people who had access to it,” she explains. “It also helps to really focus on who we want to be working with. It’s incredible the people we’ve got to collaborate with. I’m really proud of that.”

After spending an hour or two chatting in her workshop (with its mild aroma of burning wood) and nosing through the intriguing piles of work in progress, three loose ‘lessons’ floated to the surface from our conversation. Whatever your discipline or line of work – lasers or no – take note:

1. Say ‘yes’, learn on the job – and don’t be afraid to tell people you don’t know what you’re doing

“When it all started, I set up an Instagram account, and was just trying out all these different materials, learning all the settings – because the machine doesn’t really come with an instruction manual. You have to work it all out. So I was learning, testing everything out and documenting it all on my feed. It was a way of advertising different materials that I could cut, as well.

I said ‘yes’ to a lot in the beginning…basically just saying, ‘I think I can do this, if you can bear with me, I’m going to try.’ It was a learning process for me, because the jobs that were coming in and the materials that people wanted helped me learn to perfect how to cut.

Then I got some enamel mugs and thought, ‘I’ll give that a go.’ I basically went round and picked up loads of stuff and thought, ‘I wonder what this will do on that material’. I also did a lot of research online to see what could and couldn’t be done, what has and hasn’t been done – and just experimented and learnt through that.” 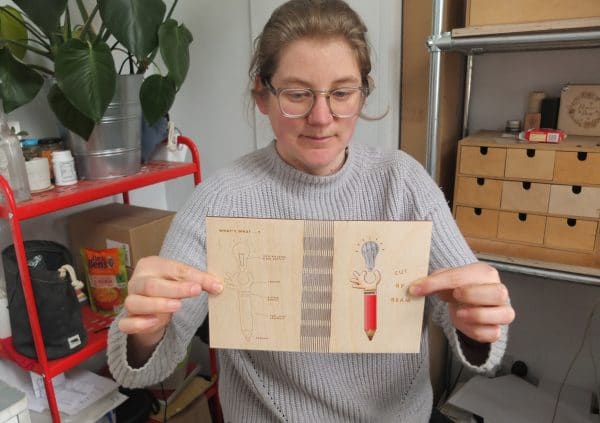 2. Experiment. Whenever you can.

“I started with wood – it’s easy, I like how it looks, and it’s quite cheap as well. It’s the most common thing to cut and etch. One of my early customers had developed a solid wool material, set into resin, and asked if I could laser cut it – so I gave it a try.

Most new enquiries that come in are around wood. And then quite often if people come in or look further into the process, they find a lot more we can do that they didn’t realise. We can do leather, paper, denim, felt, cord, recycled acrylic, glittery acrylic, bamboo, card, and etching on metal (we can’t cut metal). One customer was making soap and asked if we could make a stamp. I had no idea, but just thought, ‘We’ll try, and see.’ It’s a learning process for us and people usually appreciate the fact that we’ll try it out for them. 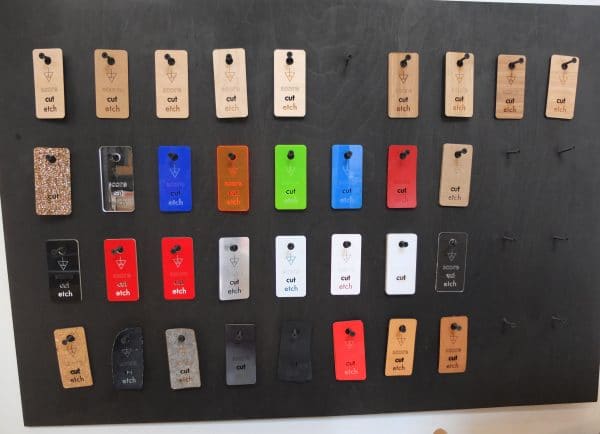 I like experimenting with new materials – it might be something that I’ve found that I like the look of… Or sometimes you can be inspired by doing a job for someone else and that might give you an idea of a new application for something, another process or another material.

Sometimes it can get quite stressful with the amount of jobs that we have in, and lots of customers to deal with. So it’s nice occasionally to just say, ‘Right, this half-day we’re actually not going to do any work for anyone else… we’re just going to play around and see what we can create.’ Because you get to know the machines so well, but sometimes you don’t get to push them because you’re restricted to the limit of the job that you’re doing. So it’s great every now and then to have some free time and see what we can do.

We wanted to find a more interesting way of doing a sample pack to send out to customers and people we want to work with, and came up with this little book-style piece [see picture] that features this ‘living hinge’ spine. Already we’ve had someone ask us to create something similar for a trophy for a race.” 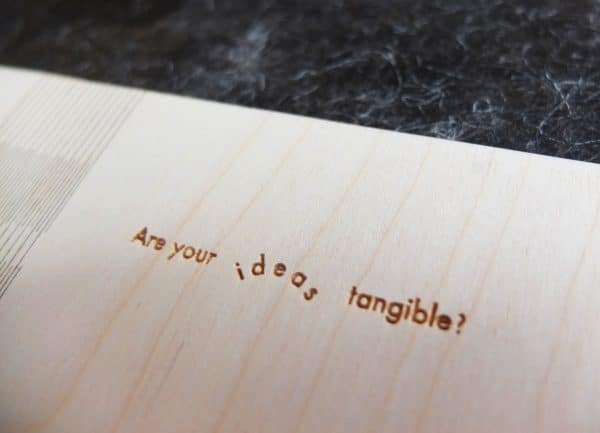 3. Work with the people you want to – it will really work for you.

“I love working with start-ups. It’s really fun when a new business comes in with a USB stick with a logo on, and you’re then putting their new business logo branding onto a physical object and it’s the first time they’ve seen it on something.

It’s also inspiring working for companies who are really pushing themselves and trying to create and find new ways of doing things – and involving us in their experimentation too. Lots of newer businesses aren’t necessarily starting something to make the most money they can. Often people start out because they want to support a certain lifestyle. It’s not always about trying to cut costs and beat people down. It’s about working nicely with people. And I think that’s why, in Cornwall especially, I feel like a lot of the creative, smaller businesses are lifting each other up, because they’re all working together in a sense, doing good stuff – and it elevates everyone. 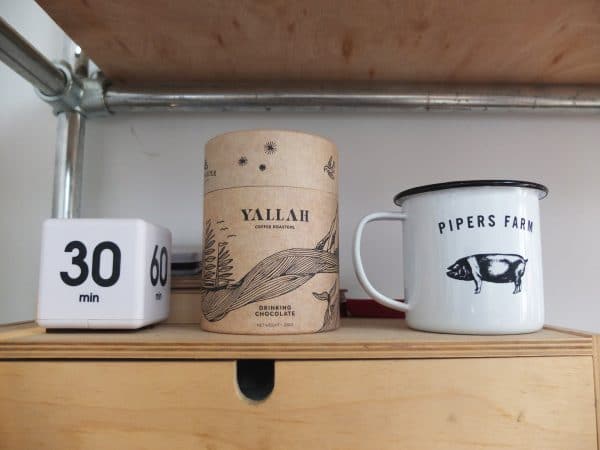 It makes you want to up your game as well; you’re buoyed by the people you work with. And when they’re striving for high standards, it drives us to create stuff that fits in with their ideas, level and standards too. Working for such good businesses like Hiut Denim and Finisterre definitely helps us improve, I think. You work with the right customer and they can really push you in what you’re doing, and do things you didn’t know you could do.” 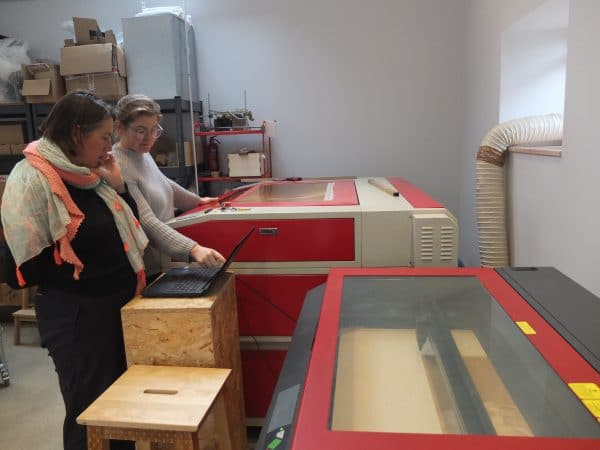 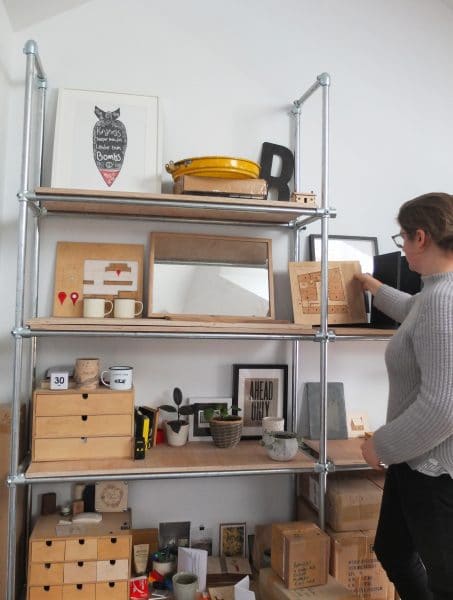