This is single-finger smartphone gaming done with style...

Are you the sort that pulls out your smartphone for a little light relief when you’re waiting for a bus/in a coffee queue/anywhere that involves standing around for more than one minute? If so you’ll be familiar with single-finger bitesize offerings that are super simple to get into for a moment’s entertainment here and there.

Well that’s the camp Spectrum48‘s OCO falls into. A rhythm-based puzzle platformer where you control a bouncing ball around ever-changing circular patterns to punchy electronic beats. The difference here is that the game is just so super slick to look at. Restrained and stylish in equal measure, its music and aesthetic are just as addictive as its gameplay. Plus you don’t have to be embarrassed if someone looks over your shoulder while you’re waiting for your flat white. Candy Crush this ain’t. 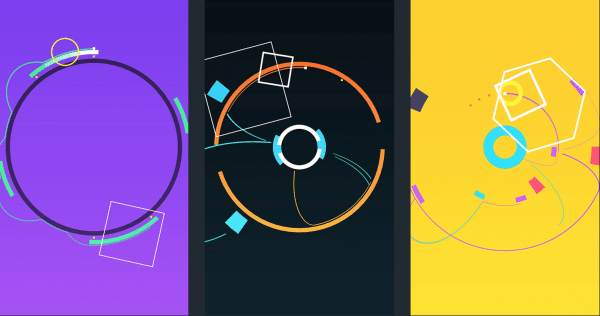 With Pocketgamer claiming it ‘has everything going for it to be my new favourite game,’ App Store picking it as ‘game of the day’ on its release, Tech Radar lauding it as a ‘game of the week’ last month, not to mention the game snagging a finalist spot in the Google Play Indie Games Showcase 2019, there’s definitely something to be said for creating things that look beautiful, as well as work well. Which we all knew anyway, didn’t we?

Congratulations to friends of Stranger Collective Spectrum48 and design wizards Venn Creative (we don’t talk about them enough do we?) for the graphic design and UX.

Previous Story
Read This: Hyperlocal Publications
Next Story How I See It – Matthew Genitempo

Female racing car drivers in the West Bank. Women of colour running for political office in the US. The first female Sharia judge. Award-winning director and cinematographer Amber Fares is interested in diverse stories that give volume to, and develop understanding of, lesser heard voices. Her feature-length directorial debut, 'Speed Sisters' (2015), has played at over 70 film festivals around the world, picking up multiple audience and jury awards, and 'The Judge' (2018), on which she was cinematographer and co-producer, has just won a Peabody Award (the equivalent of the Pulitzer Prize for broadcasting and documentaries). Thanks to her connections with one of our League of Strangers members, we carved out some time for quick chat from her home in Brooklyn...
Read More

From contentment to happiness and back again, Eavesdrop gets philosophical. Certainly something to chew over...
Read More

A day spent seeking inspiration from tools, and toiling to make them.
Read More

All Work and No Playlist: Crystal Thornburg-Homcy

Some pockets of the world are stranger than others, and more lessons learned from a temporary village green...
Read More

How I See It – Matthew Genitempo

We asked Issue 3 featured photographer Kovi Konowiecki to choose a photographer we should feature this issue. Say hello to Matthew Genitempo...
Read More

Inspired by friends' projects and the power of print, this issue we're recommending you get the downlow from your own doorstep.
Read More

Fresh from the Source #3

When will we reach the singularity? What will the future look like? What's the universe made of? Sometimes client work takes us to some mind-bending places. Here are some of the gems we've stumbled across in our research...
Read More