The Rise of the Pod People


Ear buds at the ready, as we take some time to appreciate the aural with a dive into the podcast phenomenon.

So far today, I’ve navigated the forgotten backstreets of Saigon with Malcolm Gladwell, been on a ‘Ramblechat’ dog walk with Adam Buxton, and ridden psychedelic football-themed tangents with Bob Mortimer – all while unloading the dishwasher and brushing my teeth. It’s not even 10am. Winning.

My passport to hyper-productivity is all thanks to podcasts. In fact, you could say that this is a veritable love letter to the form, just with more facts than Lord Byron would have deemed necessary.

From the weekly anticipation that arises as carefully plucked podcasts upload in to my library, to pressing play and welcoming words, sounds, stories and insights into the sacred space between my ears; podcasts leave me feeling wiser, fired up, creative, connected and often snorting inappropriately with laughter on public transport. And I’m far from alone.

A quick glance at the figures is enough to see that podcasts have become a content contagion – and a relatively recent one at that.

Back in 2003, Christopher Lydon’s Open Source, an independent production discussing everything art, ideas and politics, was uploaded as a series of RSS files for public download: and boom, the podcast form was born. Fast forward 15 years and Acast, one of the leading digital audio platforms, has just reported over 100 million monthly listens and 1.5 billion all-time downloads of podcasts and audio content to date. To put that mind boggling figure into relative terms, if every cow on the planet decided to download an episode of The Beef and Dairy Network Podcast – which I highly recommend they do – then the figures would be level pegging.

What’s more, Apple’s recent report from June 2018 reveals that we can now take our pick from more than 550,000 audio shows, uploaded to a treasure trove library so vast, and so diverse, that if you can think it, it’s probably been recorded. Whether it’s super-slick, high budget productions such as the sinister fictional series Homecoming, with a roll call of Hollywood names including David Schwimmer and Amy Sedaris, or lo-fi one-on-one discussions held in the front rooms of the interested and informed such as The High Low podcast hosted by Pandora Sykes and Dolly Alderton; if it captures your imagination, and fits in with your commute, then it’s fair game.

For me, and many others, this is where the joy lives. The sheer delight of plunging headfirst into an ocean of content, where new ideas cascade, stories are waiting to be heard, and myriad perspectives on the world are right there for the listening.

In fact, with its relatively low barrier to entry, podcasting is one of the most liberating, and easy to access content platforms around. All you really need to get started is a compelling angle, a good dynamic (if you’re thinking of co-hosting), and some decent-ish recording equipment.

“As a podcaster you can get away with a bit more than other content forms,” Dr Neil Fox – a podcast maven and one half of The Cinematologists, a cinephile podcast (Mark Kermode’s favourite, as it happens) – explained at a recent podcast workshop hosted at Stranger Collective studio. “People are much more forgiving of the podcast space in terms of its audio, over radio or video. Because it’s just so new, there’s no history to it.”

And it’s true. When it comes to video, we’re all much harder to impress; while a shonky audio, slight hiss or bus beeping in the background of a podcast recording seems to add to the immediacy, authenticity and flying-by-the-seat-of-the-pants fun of it all.

But, while the printed word will always take centre stage in our hearts at Stranger, with its calm, unobtrusive elegance; in lots of ways our love of this fledgling podcast form is because it too evokes a similar experience to reading. Just like the page, podcast and audiobooks call for our investment; they invite us to pull up a seat in the theatre of the mind, and work best when we gift them a deeper level of concentration (which if yours is anything like mine, has been dissolved by the internet like a cheap brand of Berocca).

Podcasts are a welcome antidote to this. By pressing play, hearing our familiar theme tunes and digging in for a whole episode, we feel immersed, and more connected to a subject, discussion or story. In fact, in a recent study by University College of London, researchers proved that listening to audio-based fiction made subjects feel physically more engaged than when they watch something on screen, with increased heart rates and body temperature.

“It’s all about the intimacy,” says Neil. “Podcasts have a freedom that radio simply doesn’t have. There’s a freedom of language and conversation that really connects, where hosts can talk directly to readers, in a way that video can’t do.” For many, podcasts are a world away from passively consuming content, instead inspiring a heightened sense of intimacy and imaginative interplay.

What’s more, over time, as you get to know the hosts you encounter week in week out, from what makes them tick, and how they perceive the world around them, there often grows a deeper sense of authenticity, familiarity and trust. This, in an age where truth can often be concealed like a pea under mattresses of misinformation and deception, knowing we have somewhere real, where honest opinions abound, can often feel like the reassurance we’re desperately craving.

So here’s to podcasts, a blissful remedy to our world of scrolling content, where our smartphones can once again be allies in our enlightenment instead of a dastardly distraction. And taking out the bins just got a hell of a lot more enthralling. 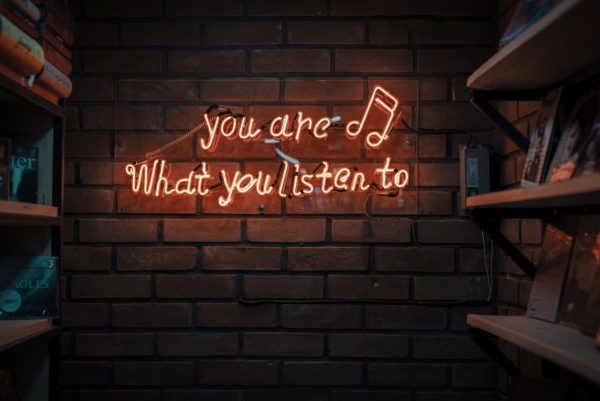 Thinking of getting on the pod-wagon?

We asked Dr Neil Fox to share his three pearls of podcast-making wisdom.

“Successful podcasts, like anything, form part of a larger conversation and have something that no one else is doing. So work out what it is that you can bring to the podcast table before you start. The Cinematologists grew out of listening to podcasts (not just film) and realising that there was a gap in the market for something that mixed live events and conversation, and where the tone veered between talking about film like scholars, critics, makers and fans. We didn’t know to what extent but we felt from the start we could grow a small, reasonable audience.”

“It seems obvious but the atmosphere and intimacy created by sound is crucial to communicating. This doesn’t mean it needs to be super professional but it needs to have a feeling that relates to the content and the style. Think about where you record and how, and make sure it feels appropriate to the content. Personally, I like ambience and conveying the sense of place where events and interviews take place but it doesn’t work for every conversation or episode, each element of content dictates the form it should take aurally.”

“It takes up a lot of time to plan podcasts, and even longer to edit. Like all creative endeavours it requires a lot of work to get people to listen in a competitive field and being active on social media is key in this regard. What sounds effortless and informal and intimate usually takes a long time to make sound like that, so build your team carefully. The Cinematologists works because of different skill sets and a fair sharing of duties. If it’s just you that is cool, but be prepared for the workload!”

This satirical agony aunt show from the offbeat brains of Julia Davis and Vicki Pepperdine is one of the most absurdly brilliant things I’ve heard in years. Listen out for the episode on Kinder Cists – utterly bizarre and brilliant.