Folk musician Angeline Morrison is getting ready to record a new body of British folk song: a powerful and evocative telling of black British history. The project and its title take some of their inspiration from two events in 1903, revealing aspects of our history that have long hidden in plain sight.

It’s February 1903; the publisher A.C. McClurg & Co of Chicago writes to William Edward Burghardt Du Bois to ask him how the final chapter of his landmark work the Souls of Black Folk is progressing, entitled ‘The Sorrow Songs’. 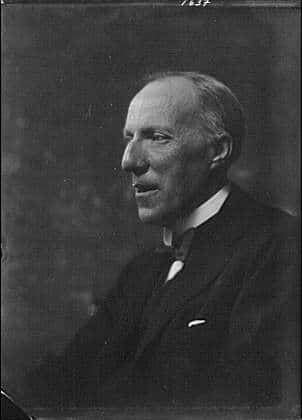 In Britain, a few months later, Cecil Sharp, a musician and music teacher, hears a folk song sung in Somerset, and embarks on a project to document British folk music for educational use and publication – the first time music of the common people has been captured and shared in this way.

While Du Bois reproduced in print the inherited songs of black folk in his critical work, exploring race and civil rights – songs that had been performed in venues across Europe decades before by the Fisk Jubilee Singers – there is a void in the national inventory of folk music that Sharp began collating in 1903: the souls of black folk.

Folk music is defined as a music that preserves the ancient traditions and culture of a nation, but rather than being created and curated by a powerful few, it originates from the many. It is a music that can speak to everyone and everything.

As DuBois put the finishing touches to The Souls of Black Folk in February 1903,  In Dahomey – the first Broadway musical written by black writers and played by a black cast – premiered. By the summer of that year, the cast of In Dahomey were enjoying a successful run in London’s West End, after failing to continue the show in the US.

While In Dahomey had relative success on the London stage, it was not replicated by its black artists in other shows in London, and did not mark the start of an opening up of culture to everyone. Some of its success in 1903 is linked to the fascination its predominantly white audience had for the cakewalk, a popular part of blackface minstrel routines.

In Black and British: A Forgotten History, David Olusaga describes how minstrel routines – “a form of musical clownery” – were popular throughout the 19th century and into 20th century in Britain. Though their form and meaning for audiences are far from singular, minstrelsy was racist and utterly reductive. “The racial stereotyping, the exaggerated gestures, white faces with burnt cork in a grotesque act of racial impersonation – everything about blackface is profoundly unpalatable today,” writes Olusaga.

"I wanted to look at the folk archive to see if there are songs with black characters, characters of colour who are articulate, represented outside of the demeaning artistic form of blackface minstrelsy or as criminal or villain."

Sharp’s collection of folk music from around Britain – gathered through those early years of the 20th Century ­– form part of a folk music archive found at the Vaughn Williams Memorial Library. An archive the folk musician Angeline Morrison has been exploring as part of her project The Sorrow Songs: Folk Songs of Black British Experience.

Morrison’s project is rediscovering untold and forgotten stories of black people who lived in Britain throughout our history, to tell them through new songs in the sonic style of folk music.

“I wanted to look at the folk archive to see if there are songs with black characters, characters of colour who are articulate, represented outside of the demeaning artistic form of blackface minstrelsy or as criminal or villain,” she says. “What I did find was that black characters are in folk songs of the past but in the service of the narrative, rather than people with their own voice.”

To borrow a phrase from Du Bois, a black character in Britain’s folk canon is not a “co-worker in the kingdom of culture.”

Mirroring aspects of minstrelsy performance, which did explore the theme of abolition (see Olusaga’s account in Black and British), and social sentiment of the time, in the five days Morrison spent researching the archive, she found a similar number of abolitionist songs to songs with “frankly racist material.” 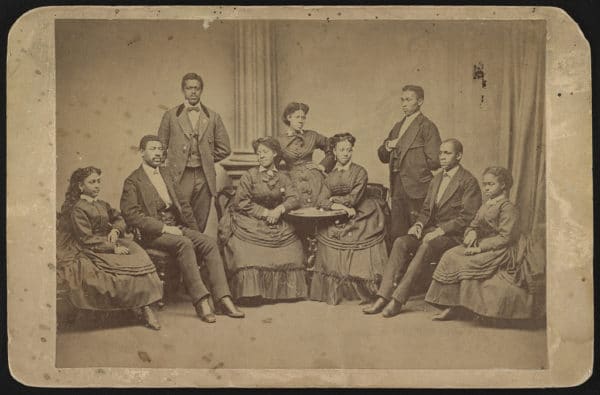 Black history and culture – despite stretching back throughout British history to the earliest Roman records – to this day, is often seen as separate to a nationwide, shared history and culture. Olusaga talks of the perpetuated notion that “black British history is exclusively a history of black settlement in Britain, rather than a global story of Britain’s interaction with Africans on three continents.”

In 1873, the legendary Fisk Jubilee Singers (from Nashville, Tennessee) introduced British audiences to the spirituals: “the articulate message of the slave to the world”, wrote Du Bois in The Souls of Black Folk. 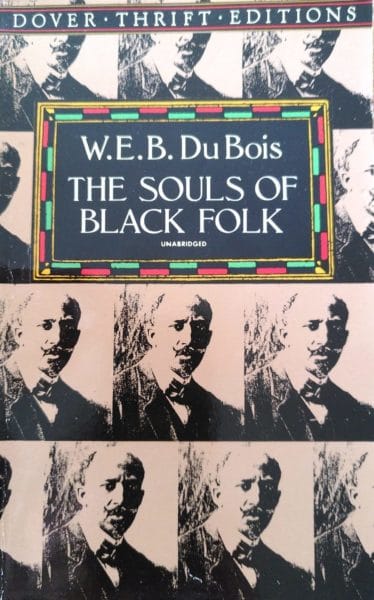 The singers also introduced into the nation’s culture sounds that are instantly familiar to many but that few associate with Du Bois’ description: ‘Swing Low, Sweet Chariot’, ‘Nobody Knows the Trouble I See’ and ‘Deep River’. The slaves that created and shared these songs were taken from Africa on British boats, docked in British ports and worked on farms owned by British people.

“They are the music of an unhappy people, of the children of disappointment, they tell of death and suffering and unvoiced longing toward a truer world, of misty wanderings and hidden ways,” writes Du Bois.

In Black and British, Olusaga describes the spirituals sung by the Fisk singers – captured on gramophone recordings in the 20th century – as “powerfully sombre and radically original” compared to the popular “plodding music-hall routines and dated minstrel clichés popular throughout the era”.

Morrison, finding in her search of historic British folk music “nothing written in song that is equivalent to the spirituals, that embodies and articulates the experiences of black people”, is now composing a body of song that seeks to do just that, in the style of the spirituals and folk music.

“Folks songs are about ordinary people that come straight from the heart,” she says. “There is that common thread between one person and another through song. I hope these are songs that will be sung and, through that, they will gain some significance.”

Angeline Morrison performs Unknown African Boy (d.1830 Isles of Scilly) at Firelight in September 2021. Find a recently released demo of the song on her Bandcamp page.

Writing in the New York Review of Books at the turn of the new millennium in 2001, the historian Tony Judt described the “English capacity simultaneously to invoke and to deny the past – to feel genuine nostalgia for a fake heritage” as unique. “It amounts today, to a countrywide bowdlerization of memory,” he added.

In 2021, this bowdlerization (“to remove words or parts from a book, play, or film that are considered to be unsuitable or offensive” – Cambridge English Dictionary) is one of the key causes for the so-called culture wars that divide society. It goes some way to explain why the publicly available stories of black culture and people in Britain throughout our recorded history are largely unknown. Hidden in plain sight, these are the stories Morrison is putting into song.

“Song is more accessible for some people, a way of understanding; it can be the way people measure and experience the world. I have always gravitated towards song ever since I was a child,” she says.

“Songs become so important as containers of experience and channels by which emotion can flow. What really struck me was that enslaved people and their ancestors in America had this body of song. For black people in Britain, we have no body of folk song that relates to our history, and experiences. They raise issues that are very much alive today.”

Find her on Instagram and Twitter as @angelcakepie and Angeline Morrison Music on Facebook to find out more about upcoming performances and the latest on The Sorrow Songs project.

Listen to Morrison talk to Front Row on BBC Radio 4 about her research.

True Romance: Redefining Our Literary Relationship with the Ocean

Adventure, escape, solace, the unknown. For centuries writers have captured the water that covers two thirds of the world’s surface in a certain way. And as readers we have revelled in it. But in the age of the climate crisis, is the time for romanticising the ocean long gone?
Read More

Fresh from a winning streak on Sky Arts’ compelling public art contest, Landmark, and with a commission from Yorkshire Sculpture Park under his belt, you’d be forgiven for thinking Sheffield artist Steve Anwar has been making sculptures all his life. Just two years since he focused his attention on the art form, he sheds light on the ideas and forces that have helped forge his work…
Read More

All Work and No Playlist? | Octavia Bright

How I See It | Sarah Jane Humphrey

Falmouth-based botanical illustrator – and this issue’s cover artist – Sarah Jane Humphrey’s exquisitely detailed drawings capture the magic that happens when natural science and artistic inspiration meet. When a mesmerising encounter with an “underwater garden” of illuminated seaweed coincided with a lockdown gift of uninterrupted studio time, she embarked on an unexpected voyage of personal and professional discovery…
Read More

For too long we have focused on what we can do with water, how we can use it, profit from it, control it. We spoke to anthropologist Dr Luci Attala about caring for water and relinquishing our imagined control…
Read More

As icy mornings bring shivers, frosted windows and a longing for blanket warmth, it’s hard to believe that just two months ago we were racing into the Atlantic for a dawn dip. Since then, we’ve been thinking about the role of the ocean in fiction, inspired by our At First Light talk on the sea and creativity. For author and At First Light speaker Tom Vowler, the sea represents a character, an atmosphere, a role that provides more than place, which interacts with the psychology of the characters: "More and more, my characters came to depend on the sea, or sought solace in the sea." So we asked our League of Strangers for some recommendations…add these titles to your list for a dose of sea salt-infused reading.
Read More

Going Forward to Our Roots…

Looking backwards, looking forwards... We just can't help ourselves at this time of year can we? Well, the seeds for Issue Eight (out in March 2022) have already been well and truly sown, with a behemoth feature I've been working on to explore our broken food and farming systems, and meeting some of the inspiring folk who are working tirelessly to grow better, fairer, cleaner, healthier, climate-fixing ways of feeding ourselves. Here's a little taster to whet your appetite... and, more importantly, we'd love to hear from any of you who'd like to contribute to/ have ideas for our upcoming ROOTS issue.
Read More