How I See It | Sarah Jane Humphrey


Falmouth-based botanical illustrator – and this issue’s cover artist – Sarah Jane Humphrey’s exquisitely detailed drawings capture the magic that happens when natural science and artistic inspiration meet. When a mesmerising encounter with an “underwater garden” of illuminated seaweed coincided with a lockdown gift of uninterrupted studio time, she embarked on an unexpected voyage of personal and professional discovery…

How did your interest in illustrating seaweed first come about?

Usually, my work is focused around illustrating plants and flowers, but about 15 years ago I became more interested in seaweeds. I live very close to Castle Beach in Falmouth, and I began taking a sketchbook with me whenever I went to document my finds. I started out just making some simple drawings, but it was always something that I wanted to develop further – to take beyond drawings and paint in watercolours. Over the first lockdown I finally had more time in my studio to look deeper into it. I found seaweeds on the beach that had been washed up through storms and started bringing bits and pieces home, looking at them more intently. And then I thought, “Well, I’m just going to start painting them.” 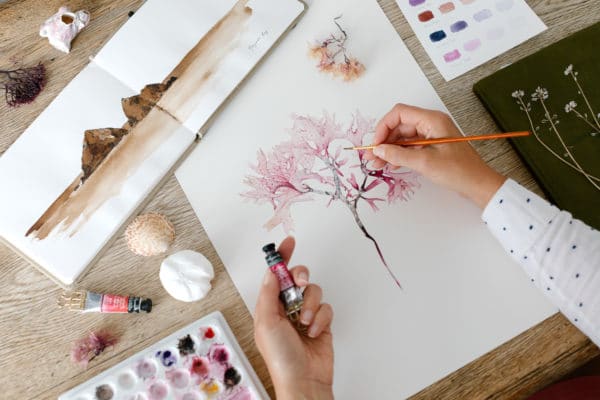 What were you hoping to achieve with your seaweed paintings?

I swim all year round and some days, particularly in the winter when the sea’s really calm and you’ve got the sunlight shining through, you see this most incredible underwater garden and the seaweed is illuminated. It’s magical – and so different to the great swathes of brown that get washed up on the beach. The idea of trying to wade through that can be a little bit unnerving because you don’t know what’s inside it. I really wanted to do something different with my seaweed illustrations and paint them in a way that I thought was beautiful and inspiring.

Do you work from life or reference photographs when you’re illustrating?

The thing with botanical illustration is that you’re working with live plants and they’re going to change. So, if it’s a cut stem, it’s definitely going to wilt over time. There’s all sorts of hacks like putting them in the fridge to try and keep them going, but the seaweed illustrations can take weeks –  the other botanical illustrations months – so obviously, I can’t keep them alive for that long. You definitely need to have backup references like photographs. I’ve had pots of lavender in the studio when I’m illustrating those or I’ve washed off the roots for something and then I’ve put that in water so I can see it…but the seaweed is a different beast altogether.

How does painting seaweed differ from painting plants and flowers?

The biggest challenge with painting seaweed was the process – I’ve tried so many different things to get it right! I’ve floated them to try and recreate that wateriness. I’ve lit them to try to capture the effect of the sunlight. To begin with, I was putting them in clear trays, lying them on top of my lightbox and trying to photograph them, but that didn’t always work because the camera’s trying to shoot into the light and it’s getting the shadows in the wrong places. But I found photographing them rather than drawing from life was the best method, because seaweeds don’t last for very long out of their natural environment, and quite often all the colour comes out. They fade and change shape quite quickly, so working from photographs gives me the opportunity to catch them in that exact moment when they’re really super fresh.

Where did you look for inspiration for your seaweed illustrations?

Seaweed is not such a massive thing here as it is in Japan, so it’s quite challenging to find information or books on the subject. But I think that’s actually been an asset, because I can develop my own ways of working. And when you develop your own processes you learn so much more. It’s authentic, because you’re not mimicking anything that’s gone before – it’s uniquely yours.

What is it that fascinates you about seaweed?

The incredible thing about seaweed is it is actually algae. Some of our first records of seaweed fossils go back 1.7 billion years, but it’s the one plant that’s barely evolved or altered in all that time. And they’re the most resilient and fertile plants on planet earth, which is just staggering!

What’s the best way to forage for seaweed?

With harvesting or foraging, you’re best doing it on a really big tide. You want to go out when it’s low as it can be. And then literally just cut it. But take no more than a third, ever. Try to be really conservative. Same rule as foraging on land really – just be thoughtful, because it obviously needs to reproduce. 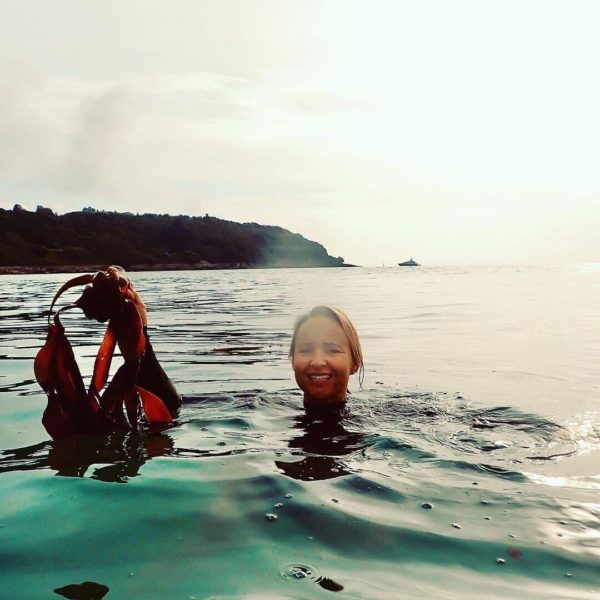 Are there any uses for seaweed that people might not know about?

If you put Serrated Wrack seaweed in hot water this incredible gel will come out of it and it’s the most amazing, skin-softening stuff. It’s the same thing that goes in very expensive face creams. And it’s all there on the beach, completely free – no need for an expensive spa! 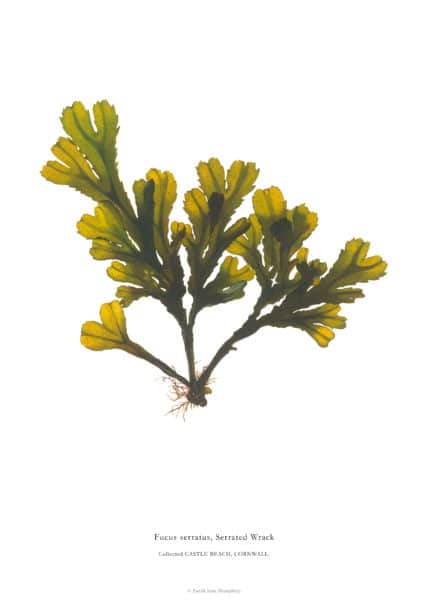 What about the environmentally-friendly aspect of seaweed?

Seaweed can harness more carbon than forests on land. The largest varieties grow up to 40 metres long, so some of the kelp forests are huge. And if you introduce seaweed into a cow’s diet, the methane that they produce is so little, it has dramatically less impact on climate change. Plus, it’s a super nutritious, sustainable food source. It’s so easily dismissed as gloopy brown stuff that we try and avoid, so through my illustrations I wanted to bring seaweed to life and encourage people to appreciate it a little more.

Do you pick the seaweed from the water or find it on the shore?

Initially, if I saw something on the beach that took my fancy then that was what I’d bring back. But as time went on, and the more books I read, there were particular types that I wanted to seek out. There’s a type of blue fan weed – an iridescent blue seaweed which is the most incredible ultra-blue you can imagine, which grows under the water. And, according to my book, the only place that it has been found in the UK is Mylor, near where I live. I was like, “What are the chances of that?!” So I’ve turned into a bit of a seaweed hunter and I’ve been trying to track that one down, but I haven’t found it yet. But I have found this other stuff called Bushy Rainbow Wrack. It’s an iridescent seaweed, so it’s got the most incredible tiny blue glowing tips that look amazing underwater.

Do you eat much seaweed?

I had it for tea last night, actually! Sea Spaghetti, which are the long strands you find on the beach. You just boil up some linguine and chuck it in and it adds a lovely crunch. It’s a golden ochre colour but when you throw it in the water it instantly turns bright green. Plus, it’s properly good for you.

Have you exhibited your seaweed illustrations?

No, but I do want to. I’ve exhibited with the Royal Horticultural Society (RHS) quite a few times, so it would be great to do it with them again. Edinburgh Botanical Gardens also host exhibitions, and I know they’re keen on seaweed in Scotland what with all those isles. 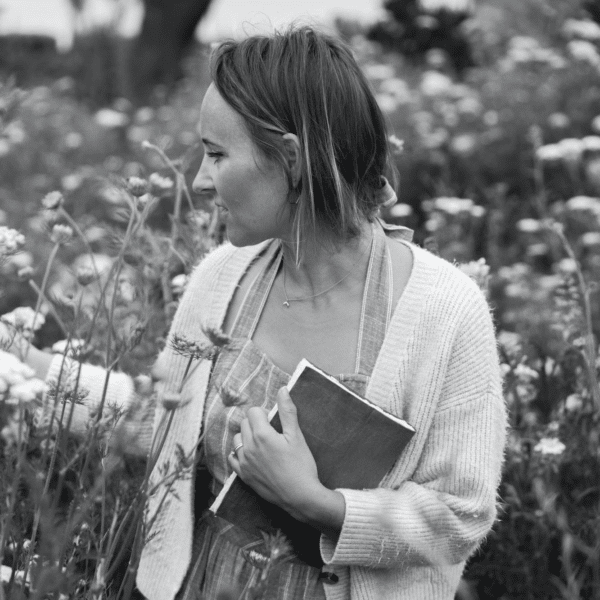 How has this project changed your relationship with nature and the sea?

I’ve learnt that when you really put the time into a project and it becomes almost like a ritual, you develop even more of a curiosity and fascination. I guess what that’s created in me is an even deeper connection with the sea. I just really want to protect it – I don’t want these things to disappear. Cornwall is such a beautiful place, and for me, living by Castle Beach; it’s one of the best rock-pooling spots in the county. It would be so sad if that wasn’t the same in ten years’ time. So, I hope that maybe from me doing these illustrations and people enjoying them that that might trigger others to ask more questions and do something good to protect the sea.

Previous Story
A New Waterway
Next Story All Work and No Playlist? | Octavia Bright

True Romance: Redefining Our Literary Relationship with the Ocean

Adventure, escape, solace, the unknown. For centuries writers have captured the water that covers two thirds of the world’s surface in a certain way. And as readers we have revelled in it. But in the age of the climate crisis, is the time for romanticising the ocean long gone?
Read More

Folk musician Angeline Morrison is getting ready to record a new body of British folk song: a powerful and evocative telling of black British history. The project and its title take some of their inspiration from two events in 1903, revealing aspects of our history that have long hidden in plain sight.
Read More

Fresh from a winning streak on Sky Arts’ compelling public art contest, Landmark, and with a commission from Yorkshire Sculpture Park under his belt, you’d be forgiven for thinking Sheffield artist Steve Anwar has been making sculptures all his life. Just two years since he focused his attention on the art form, he sheds light on the ideas and forces that have helped forge his work…
Read More

All Work and No Playlist? | Octavia Bright

For too long we have focused on what we can do with water, how we can use it, profit from it, control it. We spoke to anthropologist Dr Luci Attala about caring for water and relinquishing our imagined control…
Read More

As icy mornings bring shivers, frosted windows and a longing for blanket warmth, it’s hard to believe that just two months ago we were racing into the Atlantic for a dawn dip. Since then, we’ve been thinking about the role of the ocean in fiction, inspired by our At First Light talk on the sea and creativity. For author and At First Light speaker Tom Vowler, the sea represents a character, an atmosphere, a role that provides more than place, which interacts with the psychology of the characters: "More and more, my characters came to depend on the sea, or sought solace in the sea." So we asked our League of Strangers for some recommendations…add these titles to your list for a dose of sea salt-infused reading.
Read More

Going Forward to Our Roots…

Looking backwards, looking forwards... We just can't help ourselves at this time of year can we? Well, the seeds for Issue Eight (out in March 2022) have already been well and truly sown, with a behemoth feature I've been working on to explore our broken food and farming systems, and meeting some of the inspiring folk who are working tirelessly to grow better, fairer, cleaner, healthier, climate-fixing ways of feeding ourselves. Here's a little taster to whet your appetite... and, more importantly, we'd love to hear from any of you who'd like to contribute to/ have ideas for our upcoming ROOTS issue.
Read More