A day spent seeking inspiration from tools, and toiling to make them.

I’m not, it turns out, a gifted blacksmith. Knife-maker Ronen Burstein is patient, kind, and an excellent teacher. But guiding me through the motions, his amusement is thinly-veiled. My limp-wristed wrestle with flouro-hot steel leaves me red-faced from heat and my own ineptitude. But, blow by blow, a form starts to emerge…

The use of tools is a major plot point in the story of human evolution. When I think of the perfect knife, I think of Annie Dillard in The Abundance, describing a prehistoric chert stone blade with a quivering cosmic reverence, “at each fractured rim the blade thins from translucency to transparency,” she says of the 20,000-year-old tool, “You see your skin, and the sky. At its very edge the blade dissolves into the universe at large. It ends, imperceptibly, at an atom.”

The blades now emerging from the rise of the small business blacksmith movement glint with a similar seduction. A certain corner of social media is awash with atom-edged cutting tools that dangle the promise of outdoor adventures and ambitious homemade sushi. Small team workshops are thriving. Take Peckham’s (ever so Instagram-friendly) Blenheim Forge, started from scratch, now suppling stunning knives to London’s top chefs. “When we started [in 2014] we were more or less the only people making kitchen knives this way”, says founder Jon Warshawsky, “now I can think of at least 20 other makers that serve the same audience, it’s having a massive resurgence.” 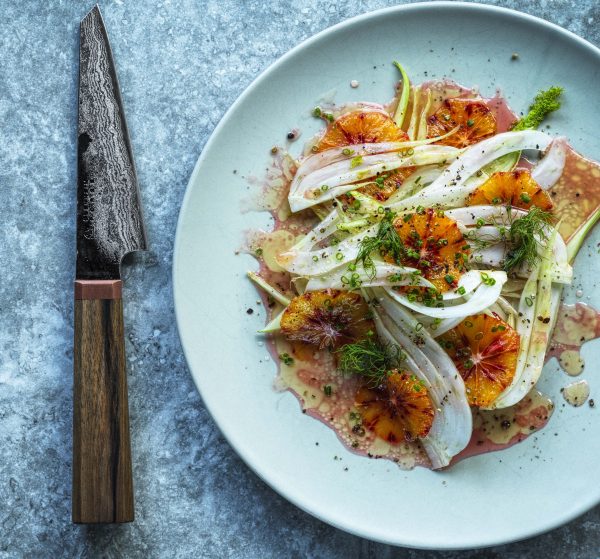 Are we just experiencing a collective market-led swoon over shiny things? Or, now we’re unable to articulate how the majority of our tools function and how they function without any physical intervention on our behalf (“Alexa, how exactly do you work?”)? Does lusting over a knife forged by hand, or learning the skills from scratch, reveal a longing to get re-involved – to dissolve our edges back into the universe a little?

Eager for a day away from the laptop, curiosity took me to Ronen’s workshop and into the world of the hammer and anvil.

Ronen lives at the end of a winding track on the Roseland Peninsula, Cornwall. In a shed by a fairytale pond he’s singlehandedly assembled a forge, anvil, and various self-built contraptions including a homemade belt-sander and fit-to-purpose jigs; From here he forges and finishes knives to sell at bushcraft and game fairs. Always experimenting, he also welcomes anyone to come and learn the trade. 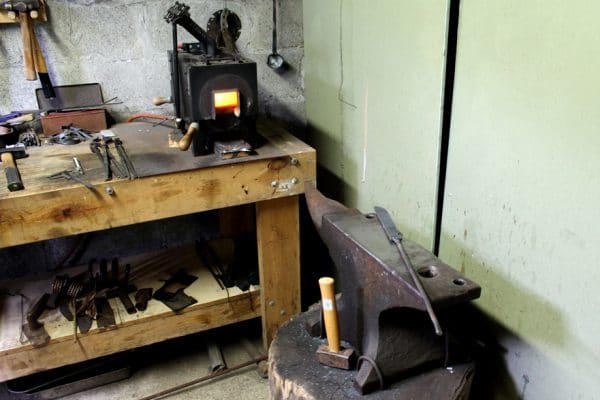 I’m warned from the outset it’ll be a long day. Ronen prefers his students to experience forging firsthand, working from scratch rather than readymade sheets of steel. And it takes graft. Why? “Because it’s fun,” grins Ronen, handing me a hammer. We heat a bar of steel up to over 1000°C in a small tabletop forge. I don’t have much time to strike the right blows before the metal hardens and it returns to the fire.

An architect by training, Ronen thinks – and expresses himself – in three dimensions. Forging means understanding the competing physical forces at play in every blow and the way metal behaves. Strike with one side of the hammer to widen and flatten, use the other and the metal will lengthen instead. Cajoling steel into shape takes constant adjustment; hammer, turn, flatten, turn, thin, squint, compensate, heat, repeat. 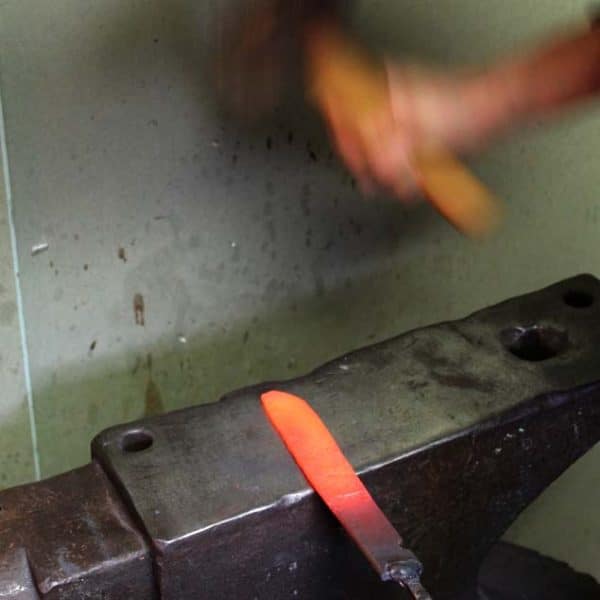 In drawing and writing, my two-dimensional comfort zone, my hand traces a form and the medium follows. In forging, my movements are a step removed from the lines of the blade. I have to work with the material’s limits and capabilities, persuade it indirectly. I need to keep the final form in my head, staying strong, repetitive and consistent as a machine. My impatience translates into hectic movements. There’s gratification, but it’s far from instant. Gradually, we draw out the tang – the steel that forms the handle, and the blade; eventually twisting the end into a spiral and leaving the knife to cool at the right pace. 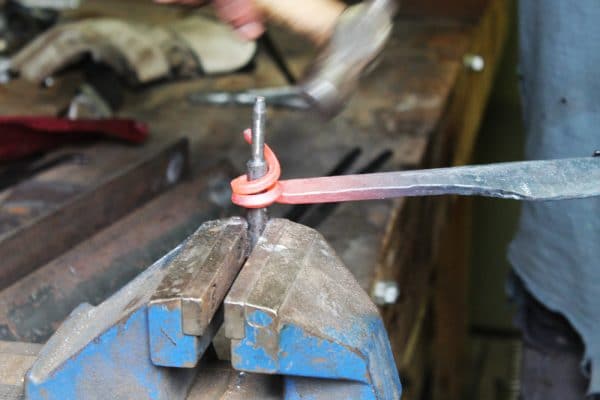 “It never gets old”, says Jon – still hand-forging all Blenheim’s knives alongside co-founders Richard Warner and James Ross-Harris – “every tool you get changes the process.” Like Ronen, Jon is self-taught. Blenheim forge began as an experiment in the back garden of a shared house. Tricked by beginner’s luck into a process that’d become addictive, they spent a couple of years slaving to turn luck to habit. Eventually Jon, Richard and James mastered a distinctive approach: Damascus (layered) steel chef knives, inspired by traditional Japanese forms. “Two years ago we’d make 10 knives and three would go in the bin, the year before half of them would, nowadays it’s like one in forty. Most of the ongoing work is around perfecting the process.” Blenheim’s knives are tried, tested and renowned for their quality, but Jon talks as if he’s still learning – the perfect knife just out of reach. 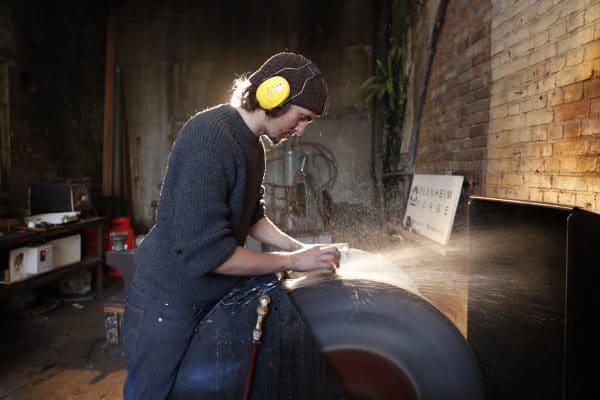 On the grinding wheel at Blenheim forge (photo: Pete Muller)

After forging my blade, I file it to a point on the belt-sander. Beneath the dullened metal a shine appears, and a cutting edge starts to form. We heat-treat the knife. Ronen explains how the hardness of the blade affects how long it’ll last, how heat treatment alters the very molecular make-up of the steel. It feels like a superpower, manipulating metal with a balance of hot fire and informed patience. We take it up to a critical temperature, looking for a change in colour and loss of magnetism, before ‘quenching’ the edge with pre-warmed oil. The oil cools the blade’s edge faster than the rest, hardening it – while the rest of the knife is kept flexible. The border between ‘just right’ and ‘no good at all’ is delicate, time is a key ingredient. 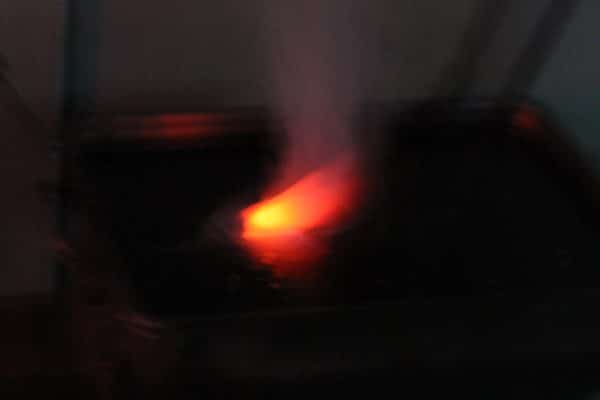 Quenching the blade in oil (and darkness)

“I’ve had some of our knives for three or four years,” says Jon, explaining that it’s not always immediately clear whether you’ve created something that’ll last. “You learn where the weak points are. Sometimes another 20 minutes on the finishing means I could’ve had years more enjoyment. It puts the labour into perspective.”

It’s a thread I’ve noticed, talking to the from-scratch knifemakers and knife-appreciators, something that taps into a contemporary lack, perhaps: the satisfaction of seeing something through from beginning to end, that takes time, with numerous stages and a clear outcome in mind. As a tool, a knife’s success is solidly quantifiable, it either does the job or it doesn’t. There’s a beginning, a middle and an end – incentive to stay at the furnace a couple of hours longer. 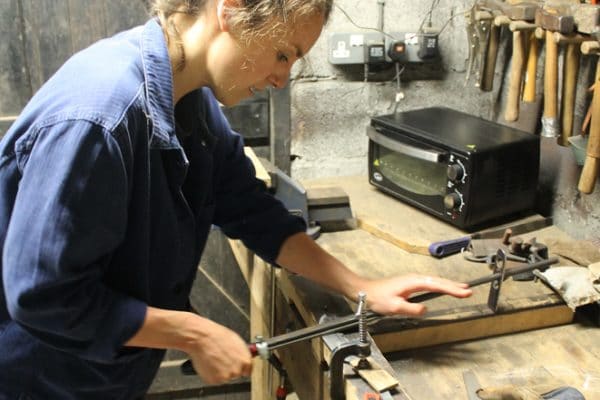 Case in point: Ronen and I stop for lunch at 3pm. I hear my stomach growl, hours have passed and I’ve only just noticed. As he makes us coffee, in his own particular (and delicious) way, he talks about the time he planted, grew and roasted his own from seed, “it wasn’t bad…”, he says, segueing into telling me about the biltong he’s making from cows down the road and describing the stages required for home-cured salami.

Jon recognises something similar in himself and his customers, “the people who get the most from our blades are normally those who enjoy something a bit more involving, it’s easier to get knives from Ikea, blunt them and throw them away.” Knives like Blenheim’s take upkeep, regular sharpening and oiling, “but if you’re the kind of person who enjoys that, who likes to make a good coffee, or bake their own bread, then we’re the right match for you,” he says. “We don’t really talk in terms of better or worse knives. Some are more personal and customisable; and some are less of a ball-ache. But I just don’t think you get the same enjoyment using them.” The market value of convenience may drive technological innovation, but it’s not a given desire. Some people are still planting coffee, to drink months down the line. 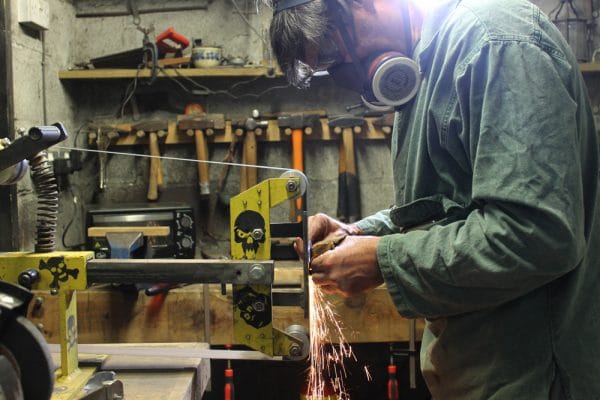 Ronen on the belt sander

There’s plenty of finishing to do after lunch. After a long day, and a return to the forge to wrap up what I started, I’m done. I sign my knife with electro-etching, daubing my scratched signature with acid and burning my name into the surface; employing the last in a chain of seemingly miraculous processes. Ronen packs it carefully into brown paper, topping me up with sharpening and upkeep tips (sheath-making must wait for another day). I carry it to the car with slight trepidation and smuggle it into the glovebox with care. If all goes to plan and we’ve done it all right, Ronen tells me the knife will last into the next generation, an actual heirloom. Not bad for a day’s work. 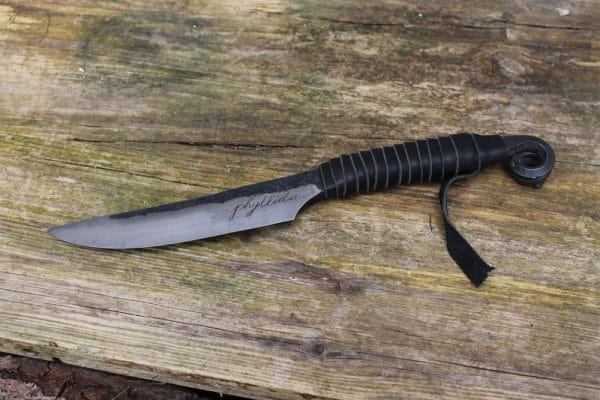 I think about the lump of metal we started with. I’m (clearly) no anthropologist, but if using tools set us on the path to becoming human, perhaps it’s a giddy pride in our tools that rounded off the job. A crow might be able to use a piece of card to reach food, but it’s not going to upload a picture to Instagram. Remember Dillard’s prehistoric knifemaker? Perfect to the point of pointlessness, she explains there’s no way his knife could actually have been used: “each of these delicate, absurd objects takes hundreds of separate blows to make. At each stroke and at each pressure flake, the brittle chert might – and by the record, very often did, – snap.” I look at my own, far-from-perfect, but sharp and strong, knife. It’s impossibly pleasing. “He knew no one would ever use the virtuoso blades,” Dillard continues, “he protected them, and his descendants saved them intact, for their very perfection. To any human on earth, the sight of one of them means: Someone thought of making, and made, this difficult, impossible, beautiful thing.”

Previous Story
All Work and No Playlist: Crystal Thornburg-Homcy
Next Story Force of Nature

Female racing car drivers in the West Bank. Women of colour running for political office in the US. The first female Sharia judge. Award-winning director and cinematographer Amber Fares is interested in diverse stories that give volume to, and develop understanding of, lesser heard voices. Her feature-length directorial debut, 'Speed Sisters' (2015), has played at over 70 film festivals around the world, picking up multiple audience and jury awards, and 'The Judge' (2018), on which she was cinematographer and co-producer, has just won a Peabody Award (the equivalent of the Pulitzer Prize for broadcasting and documentaries). Thanks to her connections with one of our League of Strangers members, we carved out some time for quick chat from her home in Brooklyn...
Read More

From contentment to happiness and back again, Eavesdrop gets philosophical. Certainly something to chew over...
Read More

All Work and No Playlist: Crystal Thornburg-Homcy

Some pockets of the world are stranger than others, and more lessons learned from a temporary village green...
Read More

How I See It – Matthew Genitempo

We asked Issue 3 featured photographer Kovi Konowiecki to choose a photographer we should feature this issue. Say hello to Matthew Genitempo...
Read More

This is single-finger smartphone gaming done with style...
Read More

Inspired by friends' projects and the power of print, this issue we're recommending you get the downlow from your own doorstep.
Read More

Fresh from the Source #3

When will we reach the singularity? What will the future look like? What's the universe made of? Sometimes client work takes us to some mind-bending places. Here are some of the gems we've stumbled across in our research...
Read More