All Work and No Playlist? | Yara Rodrigues Fowler


What helps you create? Whether it’s writing, drawing, shooting or even whittling, for so many of us, music makes the world go round. In fact, we couldn’t imagine working without it. Fascinated by how other creative souls get stuff done, we decided to unpick this causal connection by speaking to different creators about their practice, process and how music fuels their fire.

Author Yara Rodrigues Fowler is no stranger to the power of music when it comes to getting shit done. From songs on a loop to build writing momentum, to protagonist’s themes we caught up with Yara to find out how her playlist plays out…

It’s the start of your creative working day. What do you do first?

My routine to avoid depression during lockdown:

8.30am-9am:  Breakfast of soaked oats and a cup of tea. (Me and my housemate / best friend leave them overnight then eat breakfast together.) Check socials if I want then leave them for the rest of the day.

10am-lunch: Admin (emails, invoices, admin and so on at my desk – I bought a folding one for my bedroom during lockdown 1). I try to schedule meetings in this slot.

Lunch – dinner: Write. The idea of doing my admin first is that I don’t feel guilty for owing someone an email and can ignore everything for this 6-8-hour slot.

At what point in your day do you turn to music?

When I’m writing I like to listen to the same song on a loop – it creates momentum, helps me concentrate, and drowns out background thoughts and anxiety.

Where do you write and why?

I used to write in the British Library or in cafés. On Friday evenings I used to love sitting in the National Theatre and writing while theatre-goers congregated drinking wine, disappearing at the sound of the bell and coming back out at the interval. I like to be alone in a crowd.

Since July, I’ve bought a fold up desk, which just about fits in my room, and I write there. In lockdown 1, me and my flatmate were both working in the living room and it was a squeeze. 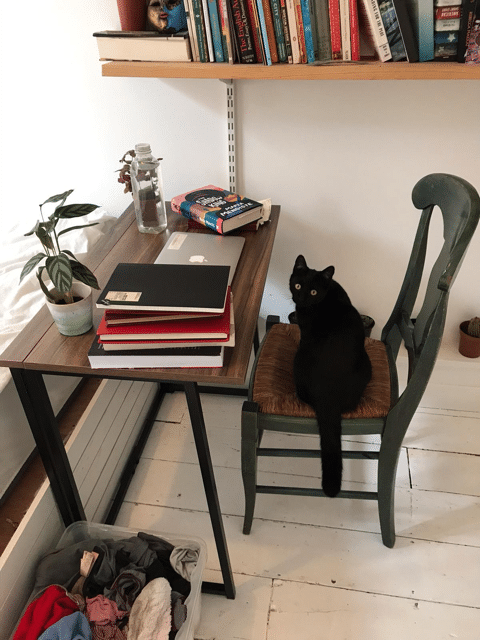 What’s your biggest distraction from writing?

Probably other commitments (I’m a trustee of a women’s refuge), reading the news, and worrying about stuff in my personal life.

I am quite strict about social media. I try to engage with it in a way that captures the career benefits – making my work visible, interacting with other writers and readers – while minimising the harm it does (i.e. to mental health, concentration and deep thinking).

Is music an important part of your creative process and if so why?

It helps me control my mood and helps me focus. Listening to one song on repeat especially. Or sometimes I listen to a pair of songs on repeat. For example, this playlist I made of two tracks from the Moonlight soundtrack by Nicholas Britell + Our Mutual Friend by the Divine Comedy (a song I first came across on Davina McCall’s Desert Island Discs) or this one that is Satisfied from the Hamilton Soundtrack + Purple Rain by Prince.

How do you listen?

Outloud unless my housemate, who is a lawyer, is “in court” in the flat. I’m aware that hearing the same song on repeat is horrible for most people so wouldn’t impose it on anyone else about.

Sometimes I need a Rachmaninov banger, sometimes a Whitney power ballad and sometimes I need Frank Ocean to break my heart. It needs to be rousing and emotional. I don’t usually listen to rap because then I’d have to be listening to the lyrics.

Only in the sense that once I’ve rinsed a song for writing I’ll be sick of it.

How did you listen to music when you were writing Stubborn Archivist? Did different characters, settings, scenes have different songs or styles that you would turn to to get in the zone?

For me it’s the scene and song / style I’m listening to while writing don’t need to correspond at all. But lyrics of certain songs are very important to me as texts in themselves – they are influences in the same way that other novels are.

What one song or album can you rely on to get you writing?

Rachmaninov’s Piano Concerto No.2 in C Minor. Here’s a playlist I made with different artist’s versions of the concerto. It also has 1 Paul McCartney song on it. I don’t know why.

What song can you not stop listening to?

Right now it’s Pink in the Night by Mitski

What song do you think your protagonists would be listening to today?

The protagonist from Stubborn Archivist would probably be hooked on Xondaro Ka’aguy Reguá  (‘Forest Warrior’) by MC Kunumi. It’s in Portuguese and the indigenous language of Guarani and the video is futuristic and mad.

The protagonists in the book I’m currently writing – Catarina and Melissa – are listening to Comigo by Elza Soares and welling up, arguing over Caetano Veloso and playing Ivy by Frank Ocean in the background at dinner parties I think.

Could you share with us your creative playlist right now?

Some tracks I’ve totally rinsed from listening to them on repeat:

It’s available from indie bookshops online and bookshop.org (and everywhere else. But if you can’t get out and you want to buy it, buy it from your local bookshop online or bookshop.org. Please).

What does it take to change social attitudes to race and end systemic discrimination? It’s a question that took centre stage in 2020. Can black storytelling help build the understanding that true change needs?
Read More

Belonging is a powerful feeling. Not belonging, arguably even more so. Award-winning playwright Gareth Farr takes us on a journey from kicking gravel on a pavement curb to the Bruntwood Prize and beyond…
Read More

Feeling overwhelmed by an endless domino effect of doom? Delete your news apps, turn off the radio and indulge in a delightful dose of 'half-full' invigoration served up by the brilliant Positive News. We talk to Pauline Milligan about big ripples, Twitter rabbit holes and the importance of hope...
Read More

This time last year, writer and former Stranger Collective intern Sravya Raju took a dive into the world of foraging. Here she relives her wandering and wondering through foraging’s offerings, lost lexicon, benefits and resurgence at a time where connecting with the natural world could bring us all a little more hope…
Read More

How I See It | Sergio Membrillas

With his bold colours, clean lines and an added drop of wit, it's hardly surprising Valencia based illustrator and this issue's cover artist Sergio Membrillas is in demand...
Read More

It's cold outside and we could all do with a rousing beat to dance off the lockdown blues. So turn up the volume and savour a hip-swaying blast of African and Latino heat to warm your soul, in our playlist lovingly selected by Clare Tavernor – documentary filmmaker and director of two landmark BBC Four series exploring the music of Africa and Latin America.
Read More

A few years ago, we commandeered a steam train, filled it with bright sparks, plied them with gin and watched magic happen. Dreaming of the day when we can make more happenings happen and spurred on by the end of the darkest dry January on record, we enlisted Tarquin's Gin’s Rory Colborne to whet our whistle and spill some cocktail secrets, from getting your ice right to why Martinis are most definitely better stirred not shaken.
Read More

Read This | Breath: The New Science of a Lost Art

Journalist James Nestor explores what it means to breathe and why we seem to have forgotten how...
Read More