It's cold outside and we could all do with a rousing beat to dance off the lockdown blues. So turn up the volume and savour a hip-swaying blast of African and Latino heat to warm your soul, in our playlist lovingly selected by Clare Tavernor – documentary filmmaker and director of two landmark BBC Four series exploring the music of Africa and Latin America.

“I found myself holed up in Iceland with Julian Assange for 24 hours at one point, but hanging out with The Breeders and Keith Richards were probably my highlights!” says Clare, on cutting her teeth at the BBC directing short films for the arts magazine programme The Culture Show.

Since then, her long-form documentaries have taken her all across the globe – in recent years she’s completed the two BBC African and Latin American music series, a film about the feminist artists of the 1970s and an observational documentary with pop star Charli XCX looking at what feminism means to female musicians today. 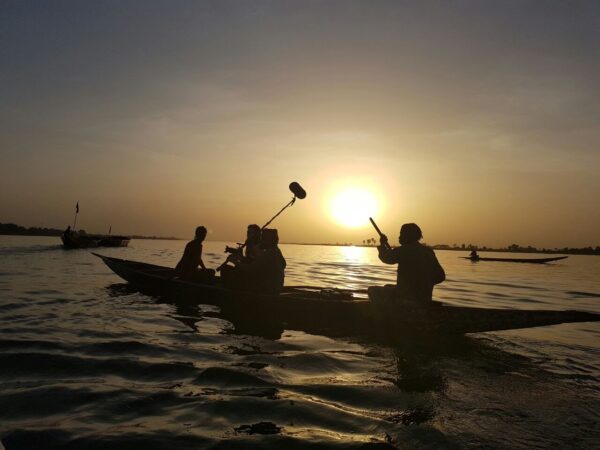 On the Niger river in Mali, filming Africa: A Journey into Music for BBC Four. Right now, she’s working on an 8-part podcast series about Island Records and the birth of reggae – from her home in Penryn, Cornwall. “I think the industry calls this ‘pivoting’, but actually it’s a project I started on before the pandemic,” she says. “It’s an epic story and we’re lucky to be able to work remotely, but I’m still hoping to get out exploring in far-flung places soon”.

Salif Keita – ‘Madan’
One of the first artists I met on my trip to Mali in 2018 – the ‘Golden Voice of Africa’ no less! A remixed version of this track became a massive hit in France – this is Malian dance music at its infectious best.

Ambassadeurs International – Mandjou
Salif Keita led the incredible Ambassadeurs in the mid to late 1970s, writing many of their hits. This track from 1978 was a major breakthrough for Keita.

Sir Victor Uwaifo – Ubodo Eyo – ‘Ekassa 12’
Sir Victor Uwaifo is a true legend of Nigerian music. One of the most memorable trips during my time in Nigeria was to his home in Benin City… delirious from sunstroke, we were treated to a wild performance of some of his hits, featuring a rotating guitar strap which he claims to have invented! 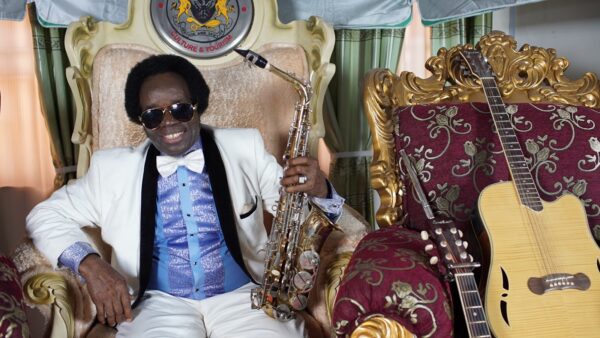 King Sunny Ade – ‘Synchro System’
Another musical legend, and actual Yoruba royalty, King Sunny Ade has to be one of the most prolific artists I’ve interviewed. At the last count he has released over 130 albums, and at 74 is still playing all night parties across Nigeria.

Orlando Julius – ‘Jagua Nana’
This song is all about telling your mum you want to go out all night and kiss lots of ladies. Julius is an afro soul pioneer and later wrote the massive disco hit ‘Going Back To My Roots’.

Fela Kuti – ‘No Agreement Pt 2’
Stone cold afrobeat classic. The genius of Fela was to embrace the funk, soul and politics of black America while keeping his rhythms 100% raw Africa.

Banda Black Rio – ‘Maria Fumaça’
Love this record – a slice of Brazilian funk full of samba beats. Found an OG pressing in Rio and had to take it home – it wasn’t cheap!

Lula Cortes & Ze Ramalho – ‘Nas Paredes Da Pedra Encantada’
I first heard this track on Stuart Maconie’s Freak Zone back in 2008 and had to track it down. An insanely rare Brazilian psychedelic gem recorded in the jungle. Most of the original copies were destroyed in a flood leaving only 50 or so in circulation – happily reissued by Mr Bongo so we can revel in the proto drum n’ bass madness on this track.

Baiana System – ‘Playsom’
Baiana System is a band from Salvador in the North East of Brazil – a fusion of African beats and political lyrics, the hallmark of their sound is the tiny Baiana guitar. Worth a google!

Cartola – ‘Alvorada’
Cartola was the leader of the legendary Mangueira Samba school and a great composer of songs from the Rio favela. One of the highlights of my time in Brazil was filming their rehearsals for carnival on a disused street under an underpass on the edge of the favela. The air was thick with sweat and samba!

Os Mutantes – ‘A Minha Menina’
Os Mutantes are underground heroes of Brazilian psychedelia – we travelled out to visit Arnaldo Baptiste from the group, who is creating wild art in the jungle. A favourite of Kurt Cobain!

Willie Colon & Hector Lavoe – ‘El Malo’
Willie Colon is the one that got away – legendary Fania trombone player and Nuyorican, I spent months chasing him for an interview for the Latin series. Alas he pulled out before I could rifle through his collection of impeccable Puerto Rican fashions.

Ray Barretto – ‘El Watusi’
Ray ‘Hard Hands’ Barretto was the conga player for the Fania Allstars. This was his first hit and the pachanga laid the foundations for what would become known as Salsa.

iLe – ‘Temes’
iLe is a brilliant young singer from Puerto Rico who we filmed with on our trip there. Reinventing the traditional bolero, this track is a heartbreaking account of the abuse experienced by Puerto Rican women on the island.

Celia Cruz – ‘Elegua’
The ‘Queen of Salsa’ isn’t Puerto Rican but Cuban. Her Afro Cuban roots have been celebrated by Benenise singer Angélique Kidjo on her album Celia – check out her cover of this track!

Roberto Fonseca – ‘Bibisa’
Stunning pianist who cut his teeth in the Buena Vista Social Club. One of the standout performances from the Cuba episode of the series.

Dayme Arocena – ‘Madres’
Dayme Arocena radiates talent! Such a beautiful voice, totally rooted in the Afro Cuban traditions of Santaria. One of my fav releases on Brownswood that year.

Afrocubism – ‘Mali-Cuba’
There is a deep connection between Cuba and francophone West Africa. In the 1960s the newly independent Mali sent musicians to Cuba to train. 50 years later Toumani Diabate and Bassekou Kouyate were among the Malian musicians to travel to Cuba and make this Grammy-winning album. Fun fact – this collaboration was the original intention for the Buena Vista film but the Malian musicians’ visas were delayed…

Fela Kuti – ‘Water No Get Enemy’
Another great Fela track from the album Expensive Shit. The title track is about pooping out a joint while in police custody (really) but this track is from a Yoruban proverb that evokes the power and majesty of the natural world – featuring a distinctly Latin flavour in the sax. Music has no borders!

Boubacar Traore – ‘Mariama Kaba’
Thought I’d finish with this one – a beautiful track that reminds me of a magical afternoon spent in Karkar’s Bamako courtyard. He played this track, while his family pounded yams percussively in the background. Perfect. 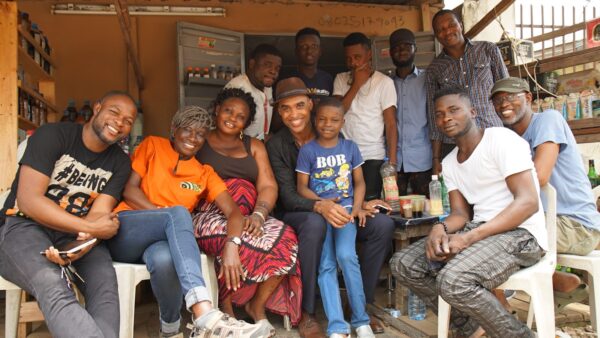 Rita Ray and the Bantu Band in Lagos, Nigeria, filming Africa: A Journey into Music

What does it take to change social attitudes to race and end systemic discrimination? It’s a question that took centre stage in 2020. Can black storytelling help build the understanding that true change needs?
Read More

Belonging is a powerful feeling. Not belonging, arguably even more so. Award-winning playwright Gareth Farr takes us on a journey from kicking gravel on a pavement curb to the Bruntwood Prize and beyond…
Read More

Feeling overwhelmed by an endless domino effect of doom? Delete your news apps, turn off the radio and indulge in a delightful dose of 'half-full' invigoration served up by the brilliant Positive News. We talk to Pauline Milligan about big ripples, Twitter rabbit holes and the importance of hope...
Read More

This time last year, writer and former Stranger Collective intern Sravya Raju took a dive into the world of foraging. Here she relives her wandering and wondering through foraging’s offerings, lost lexicon, benefits and resurgence at a time where connecting with the natural world could bring us all a little more hope…
Read More

How I See It | Sergio Membrillas

With his bold colours, clean lines and an added drop of wit, it's hardly surprising Valencia based illustrator and this issue's cover artist Sergio Membrillas is in demand...
Read More

All Work and No Playlist? | Yara Rodrigues Fowler

A few years ago, we commandeered a steam train, filled it with bright sparks, plied them with gin and watched magic happen. Dreaming of the day when we can make more happenings happen and spurred on by the end of the darkest dry January on record, we enlisted Tarquin's Gin’s Rory Colborne to whet our whistle and spill some cocktail secrets, from getting your ice right to why Martinis are most definitely better stirred not shaken.
Read More

Read This | Breath: The New Science of a Lost Art

Journalist James Nestor explores what it means to breathe and why we seem to have forgotten how...
Read More