What helps you create? Whether it’s writing, drawing, shooting or even whittling, for so many of us, music makes the world go round. In fact, we couldn’t imagine working without it. Fascinated by how other creative souls get stuff done, we decided to unpick this causal connection by speaking to different creators about their practice, process and how music fuels their fire.

From Maeve’s obnoxious big brother in Netflix’s Sex Education to the author’s obnoxious little brother in real life – actor Edward Bluemel really commits to the part. With a fanbase that’s at last exceeded our mum, and his face cropping up in some of the most exciting TV shows of the year, we can begrudgingly say: he’s doing well at his job. Worming his way into the zeitgeist, you can see him next when season two of Killing Eve premieres in April.

Whether it’s a vampire doctor or a closeted aristocrat, there’s nothing like music to set a mood and round out a character. So, we pulled some strings and asked the biggest name Bluemel to let us know his musical secrets in this issue’s All Work No Playlist.

"Nothing says 'fuck off I’m trying to prepare to attempt some good acting' like a massive set of headphones and a stony facial expression."

It’s the start of your working day, what do you do first?

Get a cup of tea (no sugar, dash of milk). It’s often very early in the morning so a bit later, once I’ve woken up, I’ll get some breakfast. We’re lucky, catering onset is usually very good and there’s a great selection, providing the opportunity for a bit of creativity: I’m talking avocado with beans, smoked salmon and a hash brown etc. Once, they offered fish fingers which, although unorthodox, was actually lovely. It’s important to not let other people’s preconceptions of what ‘breakfast’ is hamper your attitude towards the most important meal of the day.

At what point in your day do you turn to music?

Music is definitely a method of concentration for me. Sets or dressing rooms in the theatre are often very sociable places, so it’s nice to be able to pop on your headphones and escape for a bit. Also, nothing says “fuck off I’m trying to prepare to attempt some good acting” like a massive set of headphones and a stony facial expression.

Is music an important part of your creative process and if so why?

Acting involves a lot of travelling and sitting around doing nothing, so it’s great to fill that time. It’s also a fantastic tool for creating mood, emotion and character. Some music can make you feel like a different person, with a different background, capable of different things. The last shot of Call Me by Your Name is the beautiful Timothee Chamalet, crying while gazing into a fire as ‘Visions of Gideon’ by Sufjan Stevens plays. Apparently he asked for an earpiece so he could listen to the tune to help him find the emotion of the scene. It really pays off. I had to stop listening to it in public because I kept crying on the tube.

How do you listen?

I use music for auditions a lot. On a long term job I find that I am more immersed in the character anyway, so don’t need as many tricks to find them, but with an audition you’re battling nerves, minimal preparation time and a lot of pressure. It’s good to be able to turn to something like music to distract from the outside world and focus on the character. Often on the tube to the audition I’ll pick an album which has the feel of the character, or which I think the character would listen to, and let my imagination run wild. Then I’ll show up to the waiting room to find one of my actor nemeses sitting there smugly also waiting to audition and it’ll all go out the window. But it’s good while it lasts. 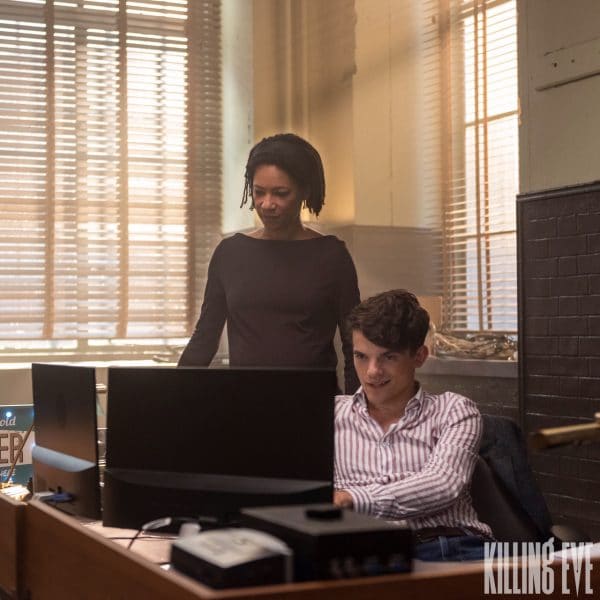 What one song or album can you rely on to psych you up for a day on set?

This tends to change from job to job, depending on what music I happen to be listening to at the time. While I filmed season two of Killing Eve I was listening to an album by Connan Mockasin called Jassbusters a lot. It’s a super weird concept album about a school kid’s odd relationship with his music teacher, but its woozy guitars, sprawling instrumentals and haunting vocals soundtracked driving through London at sunrise every morning beautifully.

Where does your excellent music taste come from?

Most of it is down to sitting on YouTube for hours on end following links to different Japanese synth music (a phase of mine that is showing no signs of slowing down), but as with a lot of people it starts with Dad (Pink Floyd, Supertramp, Fleetwood mac) and Mum (JOHN FUCKING DENVER). The first music I remember really getting to know was when I was about five, my brother bought the Shania Twain album Come on Over and it remained in our car for the best part of a decade. Much to my delight, each song from that album still injects me with the pure, distilled hit of nostalgia I crave every time. Other than that, I had a very predictable hip-hop and jazz phase at university, inspired by a friend who was cooler than me and the film Whiplash. All in all, what’s very important to understand, and I can’t stress this enough, is that NONE of my music taste WHATSOEVER came from my sister.

‘By the Time I get to Phoenix’ – Isaac Hayes. An 18-minute marathon track including a 10-minute monologue. It’s a masterclass in the slow burn, strangely riveting and very beautiful. It reminds me to trust in the process, that it’s about the journey not the destination.

‘The Great Gig in the Sky’ – Pink Floyd. A song that shows that emotion doesn’t have to be articulated through language.

‘Melody’ – Serge Gainsbourg. Essential listening if you’re ever playing a massive perv. Even better if it’s a massive French perv.

‘Where Do We Go’ – Solange. When that first piano chord hits I can’t help but feel it. The album it comes from (A Seat at the Table) wasn’t made for me (a white boy) but it’s still an inspiration to watch someone express themselves so skilfully and in such an original way.

‘Nostalgia Island’ – Haruomi Hosono. A very cheerful and atmospheric Japanese synth instrumental about a beach. You’re just starting to feel the white sand and crystal clear water between your toes, when out of nowhere it hits you with its trump card; a perfectly placed Beach Boys sample around eight minutes in.

‘Mediterranee’ – Stringtronics. A piece of library music from 1972 that’s just very, very good. Watch out for that faux Venetian guitar.

‘Rito Village’ – Zelda: Breath of the Wild. I’ve been playing the Zelda games for years now, and the soundtracks have always been a huge part of the experience for me. Tracks from old games take me right back to the age I was when I played them. The most recent game, which this piece of music is from, was so stunning it was like spending a few months living inside a Studio Ghibli film.

‘Pyramids’ – Frank Ocean. This ten-minute odyssey weaves together two seemingly unrelated stories, firstly talking about Cleopatra in ancient Egypt then jumping to a love song about a stripper who works at a bar called The Pyramid. I feel like it was a song made without parameters or rules while also being a solid gold RnB banger.

‘Pavane Pour une Infante Defunte’ – Maurice Ravel. Putting on your headphones and listening to this is a great way of briefly detaching yourself from the world and your surroundings.

‘Smooth Operator’ – Sade. Just a really good song, from the queen of sex music that’s so sexy you can’t have sex to it because it just seems a bit on the nose.